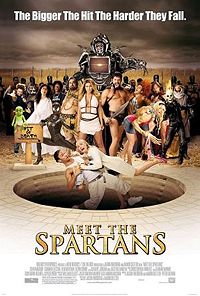 I am not that big a film snob that I wouldn’t be able to appreciate the occasional slapstick or spoof movie. I’m a big Blazing Saddles and History of The world fan and I also think that Spaceballs and Airplane! are really funny movies. The Scary Movie series may not have reached the same heights as these old comedy classics but I still find them funny enough to look forward to new additions to the series.

Having said that, the recent spate of spoofs have had a diminishing return in terms of laughs and actual effective gags. Date Movie had a few laughs in it, but Epic Movie was woefully lacking in the comedy department. It felt forced and tired. I did feel that movie producers would learn a lesson from Epic Movie and would actually think hard first before releasing another spoof lest they encounter the same disastrous results.

Apparently, they didn’t learn after all as evidenced by Meet The Spartans.

Meet The Spartans is another one of those spoofs that followed a new formula – stringing together various pop culture references using a very thin plot to link them, never mind if they are actually successfully linked or not. It was the same formula Epic Movie used and Meet The Spartans used it too without even improving on it. This is one movie that is bereft of laughs. I think I only smiled at one or two jokes, the rest of the movie was spent on thinking how bad it is.

Meet The Spartan mainly used the plot of the action movie 300 to get the movie going and then they strung together the spoofs without really thinking of whether it would fit the movie or not. The feeling is so disjointed that you would think that the guys who made the main plot did not talk to the gag writers who wrote the various spoofs and scenes. I also get the feeling that the gags were thought of first before the actual plot. This is most apparent in the gag reel that was inserted at the end credits. This was the longest gag reel ever – some sort of grab bag of jokes and gags that director ___ did not know where to put. So instead of using some more brain cells they just decided to show it at the end as a “bonus”. It wasn’t a bonus though but an irritant and a reminder of how badly written the movie is.

I particularly pity the actors who decided to appear in this movie. Kevin Sorbo is a sci-fi and fantasy icon, appearing in Meet The Spartans did not help his career in any way. It only made you feel that he may be desperate for new projects. Sean Maguire, who played Leonidas tries his best to make a thinly written character look funny and interesting but, again, no amount of talent can elevate this movie for what it is – a big piece of crap. Only Carmen Elektra seems immune to the abominable powers of this movie – mainly because she has been associated with spoofs and bad movies so it’s something that we have come to expect from her.

I would give this movie a very, very wide berth if I were you.