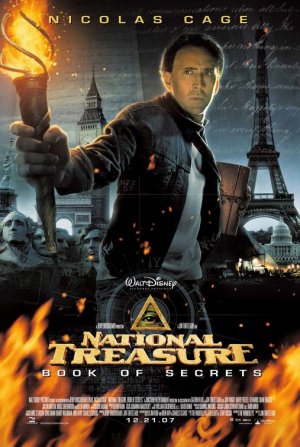 The swashbuckling adventure is one of the most popular movie genres. Fans flock to theaters just to watch the titular hero brave enemies, devious traps and henchmen and eventually triumph with the woman and the treasure. The Indiana Jones series has coopted that genre and has managed to make itself the very definition of it.

Of course, in the 21st century genres will need to be redefined for a new generation of audiences, thus the slew of movies that borrow heavily from the old, established standards. One of these movies is National Treasure.

The Nicolas Cage starrer borrows from the established plot devices of Indiana Jones while blending in the controversy-laden conspiracies of The Da Vinci Code. The great thing about National Treasure is that it actually succeeded. It took its borrowed lineage and actually produced something relatively new and exciting. The debonair hero has been replaced by the bookish, puzzle lover with a strong patriotic bent. And instead of a whip, he relies on another fellow nerd with a gift for electronics and programming.

You can just bet that because of the success of National Treasure a sequel will definitely be worked on. National Treasure: Book of Secrets gives more of the same. Same formula, same conspiracy angles, and, unfortunately, the same tricks. This is not so much an improvement from the former as an actual clone, only much duller.

One good thing that I can say about the movie is that all of the old characters have come back for the sequel. Call me weird, but I am always disappointed when not all of the actors in a hit movie return to the inevitable sequel. And it doesn’t matter if that character is just a support to the stars. I get jarred by the absence of these characters and affects continuity and the suspension of disbelief (especially if I know that said actor does not return because of pay disputes. Hear that, guy who played Tank in the Matrix?).

I’m not a huge Nicolas Cage fan but for some reason I always enjoy his work when he appears in movies where he doesn’t invest that much of himself in his character. He is much more natural and his acting tics disappear. Jon Voight as the father is still as cool as ever. I think he has been perfectly cast as Cage’s father especially since I get the same vibe from him as Cage. A great addition here is Helen Mirren, who is officially introduced to the National Treasure mythology as Ben Gates’ mom. Mirren is a great actress and I love that she appeared in a movie as silly as this but she has been grossly underutilized here.

Actually the big problem of National Treasure 2 is that, aside from Mirren, you do not get to see anything new. It’s the same plot only with usage of different plot devices and clues. Heck, even the villain (played by Ed Harris) uses Gates in much the same way Sean Bean did in the first movie.

National Treasure has stumbled upon a great formula that could ensure that it will become a great franchise. But using that franchise in this manner is not a good one. Next time think about the details some more and give the audience something fresh.