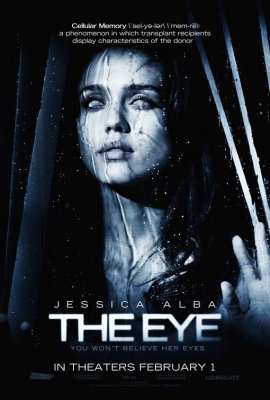 One of the best horror movies I’ve seen in 2002 was Gin Gwai. This Hong Kong horror film, a product of the pan-Asian phenomenon that really started to gain steam this decade, was directed by the Pang Brothers, both Thailand born geniuses. I loved their action/drama vehicle Bangkok Dangerous (soon to be remade again with Nicolas Cage) so I knew I was in for a treat with Gin Gwai. And I was not disappointed, it was a breathtaking movie that is poetic in its simplicity but really doesn’t pull any punches in its visual depiction of the horror scenes.

The now widely accepted practice in Hollywood of grabbing material from other countries and doing a remake of it for the more shallow general audience meant that Gin Gwai would eventually undergo the process. Thus The Eye was made. The remake stars uber hot babe Jessica Alba and two of my fave actors – Alessandro Nivola and Parker Posey. The Eye tells the story of Sydney Wells, a blind violinist, who undergoes a cornea transplant. She does regain her sight but along with it the ability to see dead people, and creepily discovers that the face she sees in the mirror is not hers but of another woman. Nivola plays the role of Dr. Faulkner who tries to help her come to terms of having her eyesight back, while Posey plays Helen, Sydney’s sister.

My favorite film professor always told me to leave my baggage about a movie whenever I enter a theater, so that’s what I did when I watched The Eye, even though I had the niggling feeling that this was going to become crap.

Unfortunately, all that pre-screening objectivity was not enough to really make form the same opinion I had before I went in – it really was crap. Let’s start with the acting. Parker Posey was a great addition to the film as the sister of Alba, she infuses her character with just the right pathos as a way of showing her guilt (she was instrumental in her sister’s accidental blindness). Nivola was less effective in his role. He was engaging as the doctor but the usual Nivola energy is not there, though I wouldn’t put the blame fully on him as his character was written quite unevenly. The biggest disappointment really is Alba. She may have improved over the years but in face of Posey’s talent, it really is apparent that it is hard for her to carry a movie on her own. She is not engaging enough and her limited thespic skills are made obvious because of the amount of screen time she occupies.

The biggest problem for me in terms of the story is the innate distrust that either the director or the scriptwriter has for the material or the audience. Why do we always have to get these long-winded explanations as to why a phenomenon is happening? Gin Gwai allowed the story to flow naturally without sidestepping and trying to make sense of why the lead character suddenly sees dead people. She sees them, period. And she tries to find out through the most logical thing that would come to a transplant beneficiary’s mind. Who owned her eyes? If the Hollywood version had just given that amount of trust in the audience and the material then this would have been a far scarier movie.

As it is, The Eye is a just a poor remake with just more expensive production values.