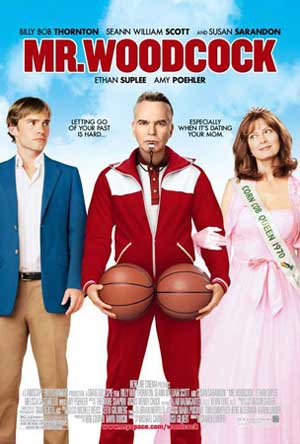 While it’s been a fairly good year for blockbuster films, 2007 has been absolutely abysmal in the comedy department. I’ve run the gamut of nearly all genres these past nine months and of all the films I’ve watched, I think I’ve seen maybe two or three okay comedies, and even fewer good ones. “Mr. Woodcock” ranks among the very poor, which leaves me even more resentful, considering the New Line Cinema marketing department decided to pimp the ever living crap out of this movie, welding the trailer onto practically every film I’ve gone to see for the past three months.

John Farley (Seann William Scott) used to be a pudgy nobody in high school, ruthlessly humiliated by his sadistic gym teacher, Mr. Woodcock (Billy Bob Thornton). Thirteen years later, John has grown into a successful young man thanks to his self-help novel about releasing painful memories. When he returns home, though, he discovers he’s up for the ultimate test, as his mom (Susan Sarandon) is dating his arch nemesis, Mr. Woodcock. Woodcock hasn’t changed at all in thirteen years and continues to make John’s life a living nightmare even as an adult.

Although I try to go into movies with as unbiased a perspective as humanly possible, I can’t deny that the marketing onslaught for this thing made me go into the theater with a rather nasty chip on my shoulder. Still, even if I hadn’t been bitter and cross toward the flick beforehand, I highly doubt I would have enjoyed “Mr. Woodcock” anyway. It is a very light comedy, with the jokes either being stale and boring or just not really jokes at all. It plods along with its story but feels entirely bland all the way through.

I have nothing against Seann William Scott, Billy Bob Thornton or Susan Sarandon. I think they’re all capable of being funny or endearing depending on the script and the crew…but “Mr. Woodcock” was not a good showcase for their talents. I suppose Thornton’s portrayal of the title character got the most laughs out of the audience and he certainly is the film’s highlight, pale though it is. Scott, on the other hand, plays little more than your typical comedy straight-man thrown into a wacky predicament leaving you to predict his every move or reaction. Meanwhile, Sarandon’s mother character is entirely forgettable.

If you’re looking for a good comedy, you honestly aren’t going to find it in “Mr. Woodcock”. Also, a message for New Line Cinema: Please, please, please show some variety with your trailers. Just because you attach the damn trailer to every movie seeing release for a span of two months that does not guarantee people are going to like it.