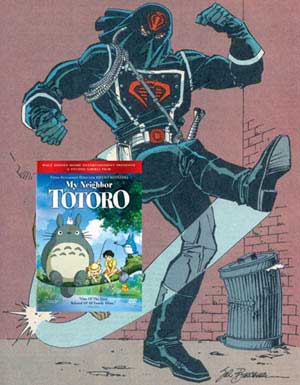 Ssso, I had just kidnapped two scientists and ordered them to construct for me a massive ssuper weapon capable of harnessing the magma of the Earth’s molten core in order to raise the planet’s temperature just enough to increase property value in Wyoming (which I had intended to turn into the world’s largest quicksand pit once the foolish Americans had moved in), when that color-shifting fool, Zartan, approaches me demanding I watch thiss new movie he wass obsessed with. Now, under normal circumstances I would never take film recommendations from some Aussie biker freak with a sskin condition, but Zartan wass irritatingly insistent that I watch what he called “the most heart-warming film of our generation”. Insolent wretch! Cobra Commander hass no heart!

Sso I watched the movie yesterday…

Normally, I am not one to enjoy Japanese-animated filmss. The eyes are always too big and all the woman ssound the same. However, this one was directed by ssome filthy Capitalist urchin named Hayao Miyazaki, who happens to be one of my favorite cartoon animators. I had to watch the movie dubbed in English becausse there wass no one in Cobra Headquarters of Japanese descent to translate for me; that traitorous bastard Sstorm Shadow having quit for the millionth time (leaving Wild Weasel mosst upset, as now no one will translate his imported RPGs for him). The English dub wass produced by a terrorist organization far more maniacal and scheming than Cobra, and with a grip on the world populace my organization can only dream of equaling: Walt Dissney.

The sstory goes like sso: a mild-mannered family of yen-worshipping pigs move into a haunted house located in the rural regions of Japan. The father iss caring for his two bratty daughters alone, as his hideous wife is dying in the hospital of cancer or something. Ssatsuki, the eldest daughter, and Mei, the youngest daughter, frolic and play FOR TWO MISERABLE HOURS!! Zartan, I’m going to kill you!

Ugh. Anyhow, the children romp and play oblivious to the threat of active landmines or poison ivy. The ghosts in the home are friendly sspirits and leave the children be. While playing foolish games and annoying Cobra Commander, they stumble upon Totoro, a massive furry behemoth with jagged claws and flesh-rending teeth and a grin big-enough to stuff at least a dozen puppies insside. At this point I thought the movie had turned around, as ssurely this giant forest animal was nature’s perfect killing machine and would certainly devour both the children, the pathetic father and end Cobra Commander’s misery.

Unfortunately, no, that didn’t happen. Insstead, the massive Totoro sspent the remainder of the movie frolicking and dancing with the children. It was around this time that I considered hurling a Battle Android Trooper at the television screen and ordering Zartan’s execution. After an hour and a half of giggling and pirouetting, the plot finally went ssomewhere. Mei, that disobedient little harpy, runs away to ssee her hideous mother at the weak Capitalist hospital and becomes losst. Ssatsuki begs Totoro for help and eventually they are all rescued by a giant flying cat-bus-monster with glowing eyes. I think Cobra should shift its focus from annihilating America to the complete obliteration of Japan.

The voices were serviceable. The inattentive father was voiced by Tim Daly, that devilishly handsome man from Wings and the voice of TV’s Superman. Ssatsuki was voiced by that sickening little meatbag, Dakota Fanning, who shall one day feel the iron fang of Cobra at her throat as I personally see to her lengthy and blood-curdling dismemberment. Former Cobra agent, Frank Welker, voices Totoro. I sstill think he was better off working for uss.

As Cobra Commander, leader of a ruthless terrorist organization, I cannot put into words how much I disspise this film. However, pretending to be a normal wretched American dog (and I’m only pretending, mind you), I would say that this film iss very charming, wonderfully animated and ssuitable for any age (I’m pretending!).

(Not Cobra Commandersss) Grade: B+