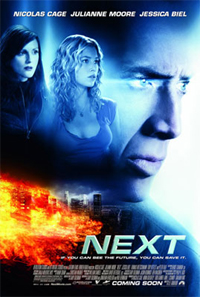 This movie really surprised me. The onslaught of trailers with nearly every movie released for the past few months made me feel like I saw “Next” long before it was even released…and I didn’t like it. But low and behold, after actually seeing the movie, “Next” turned out to be rather enjoyable. It has its flaws, but the premise and direction are strong enough to outshine the lesser portions.

Chris Johnson (Nicolas Cage) has the power of limited precognition: he can see what’s going to happen, but only two minutes into the future and only if it effects his personal timeline. However, that changes when he meets a girl named Liz (Jessica Biel), someone whom he’d had visions of for years and is able to boost his precognitive powers. Johnson’s abilities have come to the attention of the FBI and Agent Callie Ferris (Julianne Moore), who want him bad. It seems Russian terrorists have stolen a nuclear warhead and intend to detonate it in Los Angeles. Ferris wants to use Johnson to locate the nuke and prevent the disaster, but simultaneously, the terrorists want Johnson dead so he can’t get in their way.

I guess I’ll start at the bottom and work my way up. Probably the worst part of the film was the romance between Jessica Biel and Nicolas Cage, (who is almost twenty years her senior). From her perspective, Cage is this creepy old hitchhiker guy who is constantly talking about destiny and staring at her. Yet for some reason they fall in love and get it on in a matter of two days on the road. Yeah. Not buying it. Another annoyance is some of the very amateurish CGI used during a few of the action sequences. It’s only really grotesquely poor in one scene, the landslide, but it’s bad enough to take you out of the experience. I’m talking Sci-Fi Channel Original Movie-bad. The villains are also terribly transparent. The movie made an effort to focus almost entirely on Johnson’s perspective, which is fine, but it doesn’t do the Russian terrorists any favors. Why do they want to blow up LA? We may never know. They just do.

Okay, now that that’s out of the way, I can start talking about the cooler points of “Next”. First and foremost, the way Director Lee Tamahori realized Johnson’s precognition visually is very entertaining and totally makes the movie. There are times when you’re never quite sure if what you’re seeing is the present or one of Johnson’s visions. So without warning things will go wrong and the movie will “rewind” back to a certain point. Other times, to display Johnson’s ability to view multiple futures, Nicolas Cage will split up into dozens of “clones”, each going in a separate direction all at once and registering different experiences until they happen upon the “right” one. It’s very cool to look at.

While I didn’t buy his romance with Biel for a second, I still thought Cage was great in this one. Johnson is supposed to be this weird, quirky, kind creepy but funny guy…and who embodies that template better than Cage? Julianne Moore’s character of Agent Ferris can be a little grating on the nerves, though. She’s supposed to be under heavy strain from having to thwart a nuclear holocaust, but instead just comes across as an atrocious bitch.

“Next” has its problems, but the idea behind the film is really very cool and it’s brought to life quite well. If you absolutely have to go see a movie in the theater this weekend then this is the one you ought to check out.