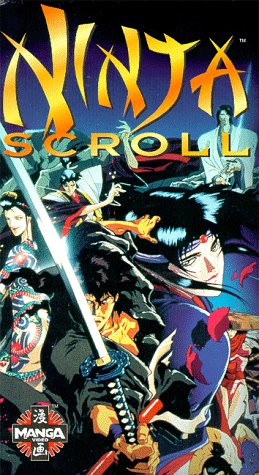 One of the first movies people watch when they’re starting to get into the whole anime-thing, Ninja Scroll is a movie that’s easy to like. A fairly cut and dry story, Ninja Scroll is entertaining mostly through its outstanding animation, bizarre characters and unforgettable fight choreography.

During the days of feudal Japan, wandering Samurai, Jubei Kibagami, is enlisted (against his will) by the geriatric government spy, Dakuan, to take down Lord Gemma and the Eight Devils of Kimon. The indestructible Lord Gemma intends to hijack a massive shipment of gold and use the wealth to become the all-powerful Shogun of the Dark. Along the way, Jubei and Dakuan meet-up with a cold-hearted female ninja, Kagero. It’s an uneasy alliance at first, but the trio gradually learns to like each other as they are hunted down by the freakish Devils of Kimon.

Mad House Studios, the same people that brought us Spawn the Animated Series, Vampire Hunter D: Bloodlust and Perfect Blue, animate this movie and do a magnificent job. Despite being over a decade old, the visuals in the film are stunning and the fight scenes are brutal beyond words. Director Yoshiaki Kawajiri, whose resume includes the likes of Wicked City and Kimba the White Lion (what is wrong with this guy?), knows how to keep the audience’s adrenaline pumping with his numerous “holy crap!” fight sequences.

You can’t talk about the fight scenes in this movie, however, without talking about the characters, as their individual quirks attribute largely to the action. The Eight Devils of Kimon are monstrous human beings, each blessed with a unique special ability. There’s a guy made of rock, a guy with a wasp’s nest in his back, a guy who can travel through shadows, a blind swordsman and so on. These villains are each very memorable with hardly a single lame-o in the bunch. Jubei, Dakuan and Kagero each have their own special abilities and skills which make them stand out in the crowd, as well. This element of “super powers” almost gives the movie a comic book-feel to it, which might be why it became so instantly popular in the west. Even if you don’t like anime, you’ll most likely enjoy Ninja Scroll.

There are a few downsides to the movie, however. Despite having worked on kid’s shows like Kimba the White Lion and the Fantastic Adventures of Unico, Yoshiaki Kawajiri is a total pervert. While one instance of severe molestation/borderline rape is somewhat essential to a part of the plot, there are unnecessary scenes of people doing it doggy style or women having snakes in their whats-its. I’m not a prude about this sorta thing, but it will most certainly scare off a number of viewers, especially since the rape sequence happens pretty early in the film. These scenes make-up for only a miniscule portion of the actual film, but they’re hard to forget and make anybody watching the movie look like a total perv.