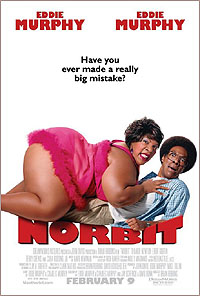 I think I’m gonna be sick.

It’s hard to put into words how diabolically atrocious this Eddie Murphy “comedy” really is, but I get the feeling most of you reading this came to the same conclusions about its quality after watching the 30 second television spot. Let me tell you, if it wasn’t my job to review movies, I wouldn’t have poked this thing with a stick just to see if it were still alive.

Norbit (Eddie Murphy) is a soft-spoken, easily controlled little man who is forced into marrying a loud, obnoxious, overweight ethnic stereotype, Rasputia (Eddie Murphy). Norbit’s life is pretty much miserable, as both his wife and her three mobster older brothers (Terry Crews, Clifton Powell, Mighty Rasta) treat him like dirt. Then one day, Norbit’s lost love, Kate (Thandie Newton), walks back into his life. Norbit is overjoyed to see her again…until Rasputia finds out and makes his life considerably more painful. The plot thickens when Kate’s fiancé (Cuba Gooding Jr.) shows up, as he is really a sleazy conman looking to grift Kate out of her fortune and turn the local orphanage into a strip joint.

The main “draw” of this film, at least, what the producers and director thought would entice the general audience to donate $10 and 80 minutes of their time, is that Eddie Murphy jumps around in a fat-suit. No, this isn’t “The Nutty Professor 3”, but it might as well have been. At least then it would have had some name recognition. No, “Norbit” is your typical run-of-the-mill PG-13 comedy where minimum effort was expended in writing the script in hopes that it could float on star-power and cheap laughs alone.

I use the term “star-power” loosely, of course, since Eddie Murphy hasn’t contributed anything of worth to the world of comedy since…jeez…the mid 90’s? Or is that being much too generous? I suppose if there was one, mildly humorous aspect to the film, it would be the third character Murphy plays: Mr. Wong. He’s actually rather good at playing a stereotypical Chinese man, and the make-up effects were effective-enough that it took me a while to realize it was him. Unfortunately, the writing for this movie is so resoundingly sub-par that even the “funniest” part of the film leans mostly in the direction of annoying.

To try and interject some more humor into the film, Eddie Griffen and Katt Williams play a pair of good-natured pimps who run a barbecue joint on the side. Again, annoying. Another side character is Buster, played by Marlon Wayans. Anything involving a Wayans brother is by nature obnoxious and stupid, so I won’t even go into detail on how irritating his character was.

The writers also thought it would be a good idea to hurl in catch phrases, since those are always a surefire means to success. Unfortunately, rather than come up with their own, they just stole one from Friends and added some black sass to it: “How you doin’!?” Cuba Gooding Jr.’s character also has his own phrase: “I’m out!” Hilarious. Tell me again why they gave this guy an Oscar?

Did you really need me to tell you this movie was awful? I know there’s that “you can’t tell if a movie’s bad just by watching the trailer”-rule, but in the case of “Norbit”, you most definitely can judge this book by its cover. Eddie Murphy continues to prove that he’s another one of those irritating celebrities who should have disappeared a decade ago and put themselves out of our misery.