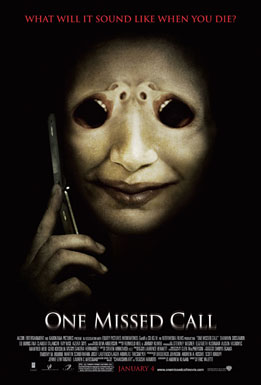 Hollywood has really found a goldmine in Asian movies. Asian films have been snatched up left and right and being given a hollywood makeover. I guess the bigwigs at Hollywood can’t be bothered to think of anything new so they just get the fresh ideas from other countries.

Take for example, One Missed Call, which was a movie helmed by the wonderful Japanese director Takashi Miike. Now, the Hollywood version of the movie is about to be shown. The remake stars Shannyn Sossamon and Edward Burns. The plot of the movie is simple but quite scary — a person gets a phone call on his cellphone and when he answers it, he hears a voicemail of himself at the moment he dies. Any person who gets the phone call then dies. Creepy, isn’t it?

I don’t know how the Hollywood remake will measure up to the quiet and disturbing horror of the original Japanese film. Here’s hoping that it does well.