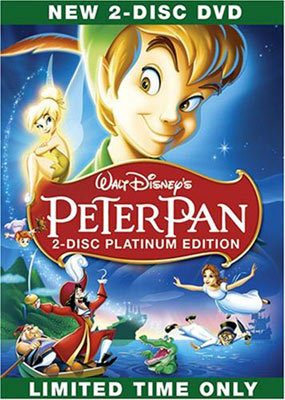 “Peter Pan” isn’t one of the Disney movies I recall all that fondly from my youth. I think the reason for that is because I never saw the thing in its entirety, mostly just in clips from specials like “Disney’s Halloween Treat” and what-not. So when it finally came around on Disney’s Platinum DVD collection I was somewhat overjoyed at the chance to finally watch a classic Disney film I’d never gotten to see before. My expectations were perhaps a little overhyped, but I’d say they were reasonably met. I can’t claim that “Peter Pan” is one of my favorite installments in the Disney animated canon, but I can say that it was overall a very fun picture.

Wendy (Katherine Beaumont), John (Paul Collins) and Michael Darling (Tommy Luske) are your typical kids living in Englad in the early 1900s. They all have very impressive imaginations but find their love of fantasy constantly being challenged by their temperamental father. One night, Peter Pan (Bobby Driscoll) comes to visit and whisks them away to Never Land, a place where your every fantasy can come true and you never have to grow old. They quickly find that a little fantasy can be a dangerous thing, as the dreaded pirate Captain Hook (Hans Conried) repeatedly attempts a ruthless revenge on Pan and his crew of Lost Boys for severing his hand and feeding it to a crocodile.

Disney films always have a moral to them, whether you like it or not. One moral they repeat quite often is that even though you grow up and your priorities may change, you never have to give up the things that brought you joy when you were young (check out “The Many Adventures of Winnie the Pooh” and “The Bridge to Terabithia” for more of this lesson). Sure, it may be trite, but I’ve always found it to be one of the better morals Disney has tried to instill upon their youthful audience and it’s certainly less bland than other flicks with morals like “family is good” (“Lilo & Stitch”) and “lying is wrong” (“Aladdin”). “Peter Pan” takes a very in-your-face approach to this particular concept and lays it on the viewers as unsubtly as possible. Which is fine, since that’s the whole point of the story, after all.

What I enjoyed most about “Peter Pan” was the cast of colorful and memorable characters that seemed to have a bit more heart pumped into them than the characters featured in more recent Disney offerings. The title hero represents the ultimate male fantasy, as he always comes out on top, never sweats in the face of danger and has every girl he meets swooning in his direction almost instantaneously. Despite being a bit of a jerk, he has a boyish charm that keeps the audience from hating him. Of the three kids who journey with him to Never Land, John came off as my favorite. His sense of stereotypical British elegance, dignity and intelligence made him stand out rather humorously during segments of total absurdity, yet being a kid he’s never stuffy or a party-pooper. You’ve also got the ever-silent Tinkerbell, who is admittedly very cute in her antics.

But it’s really the villains that make the movie, character-wise. Captain Hook is a Disney icon as far as badguys go and Hans Conried’s performance deserves a “bravo”. Hook’s bumbling assistant, Smee, steals a lot of the scenes featuring Hook but never gets too annoying like other dimwitted sidekicks in Disney flicks. His charm resides mostly in an outstanding performance from Bill Thompson, a regular Disney voice actor you might recall best as the White Rabbit from “Alice in Wonderland”. Then there’s the ever-present and ever-menacing crocodile, constantly haunting Hook and trying to gobble him up.

I suppose if I had one major complaint about this film it would have to be the music. None of the songs really had that sort of Disney “oomph” I like to hear and I can hardly remember the lyrics to a single one. I know there are many who would disagree with me, but as far as my personal tastes are concerned, they all seemed rather dull. “What Makes the Red Man Red” stood out, but that was mostly for its hilarious political incorrectness. “You Can Fly” was pretty good, now that I think about it, so I suppose the film had at least one number that stuck with me.

“Peter Pan” is a good Disney flick and very worthy of the “classic” label the company slaps on just about everything. With its new availability on DVD it should be easier now than ever for kids to check this flick out. However, I wouldn’t put it in my Top Ten Disney list and there are definitely better and more entertaining Disney movies you can show your kids or just enjoy on your own.