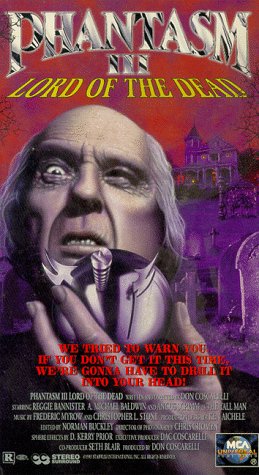 This movie got so much right, and yet so much wrong. With all the installments written and directed by Don Coscarelli, Phantasm truly is his “baby”. However, when studios get involved and start giving orders, and essentially mucking with the creator’s vision, well…Phantasm III is what you get.

Picking up exactly where the last film left off, Reggie rescues Mike from the clutches of the Tallman and the two manage an escape. Seeing the Tallman survive their last attempt to destroy him, the pair is low on hope. However, Jody (last seen in the process of becoming a dwarf) makes a surprise come-back in the form of a Sentinel. Apparently rebelling against the Tallman, and providing cryptic advice, Reggie and Mike follow his instructions. However, almost immediately following this cast-reunion, Mike is taken prisoner by the Tallman and Jody is severely damaged. In search of his lost friend, Reggie meets up with Tim, an orphaned 10 year-old boy who doubles as a marksman, and Rocky, a nunchak-wielding lesbian with a more-than-passing resemblance to Bobby Brown. Together, they track the Tallman down to Boulton Mausoleum to hopefully finish him off.

It’s not the story that ruins Phantasm III. This installment maintains perfect continuity and even provides insight on what the Tallman is up to and how he turns corpses into dwarves and Sentinels. We’re even treated to the return of A. Michael Baldwin as Mike and Bill Thornbury as Jody.

No, the real problem here are Reggie’s two new sidekicks he gets saddled with after Mike gets kidnapped early on. There is absolutely no excuse for Tim. Watching that little punk try to steal the show and deliver “badass” one-liners as he shoots zombies just makes you want to wretch. And Rocky is your standard man-hating stereotype, and seeing her attempt to fight Sentinels with a nunchak is just…stupid. I’ll give her kudos, though. The scariest part of the movie happens to be a gratuitous sex-scene between her and balding, middle-aged Reggie. Brrrr!

The viewer also gets “treated” to a posse of bumbling zombies, constantly attempting to provide some sort of comic relief which the movie could REALLY do without.

But honestly, the movie isn’t all bad. It’s an essential chapter in the Phantasm saga and does provide some moments of satisfaction. Pretty much any scene not involving Reggie’s idiotic sidekicks is great to watch. Seeing the cast of the original interacting is definitely a blast (even if they haven’t aged too gracefully). There’s plenty of gore and some wonderful moments with the quadruple-barrel shotgun (Reggie shooting at the dwarves in the trees was my favorite). And if you’re a big fan of the Sentinels, then you’ll be happy to know they get not only a lot more screen time and larger numbers, but they get a boatload of new killer gadgets, too.

Despite the studio-mandated additions, this still FEELS like a Don Coscarelli film. His trademark dream sequences, flashbacks, eerie lighting and unforgettable theme music will leave you with no doubt that this is a true installment to the storyline, but the token characters and awkward comic relief will stick out like a sore thumb.

I’m afraid I have to give this film a C-. Phantasm III is regrettably the weakest link in the franchise.