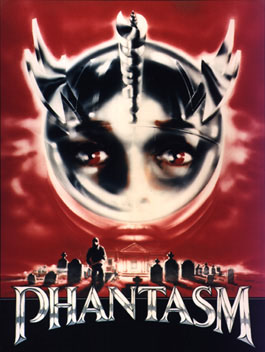 Phantasm can only be defined as one of those “essential” horror movies; an installment in the genre so fantastic no fan should ever pass it up.

Mike, a young boy, is distraught over the loss of his parents and is even more concerned about his only remaining family, his older brother Jody, leaving him all alone. While spying on his brother at Morningside Cemetery, Mike spots a mysterious “Tallman” loading caskets into a hearse when he should be putting them in the ground. Things get even weirder when Mike, Jody and their friend, Reggie, find themselves under attack by strange, snarling diminutive creatures in dark robes. It would seem that this “Tallman”, along with his army of monsters and killer orbs, is harvesting human corpses to be shipped off to another dimension for reasons unknown. The trio look for a way to save themselves and hopefully stop the Tallman, but it’s not so easy when reality starts to unravel.

There are so many things which make Phantasm such a memorable movie. Usually the first thing people recall are the Tallman (played by cult favorite, Angus Scrimm) and the Sentinel (the flying chrome ball with the drill-bit). The Tallman is one of the more underrated horror icons, at least in the mainstream, never attaining the popular status of Freddy, Jason or even Chucky. The Tallman is never-the-less, a very creepy, very unnerving villain who truly makes the movie. However, while its part in the first film is rather small, the Sentinel is considered by most to be the coolest part of the movie; watching it zoom around corners, drill into people’s noggins and drain them of all their blood leaves a lasting memory on those who see it.

One thing I, personally, remember best about the film is the eerie, unforgettable score. Phantasm’s unearthly theme fits the film’s concept of a waking dream perfectly and the movie would not be the same without it. And for anyone who ever grew up in the suburbs of a small town, the setting will seem strangely familiar. Save for a few palm trees here and there, this movie could easily take place anywhere in the country, which is why it hits home with so many who see it.

Fans in the horror community often refer to Phantasm as “the thinking man’s horror franchise”, which is actually a rather accurate description. Director Don Coscarelli tells the story with clever use of flashbacks and dream sequences, and when coupled with the unsettling music, dim lighting and surreal plot, leaves the audience never quite sure if what’s happening is real, a dream, a nightmare or something else.

Phantasm doesn’t give everything to you straight, it leaves enough plot-points open for interpretation so that people can come to their own conclusion. Was it all really a dream? Was it Mike’s way of dealing with the loss of his family? Or was it all really an alien plot to turn human corpses into slave labor in another dimension?

A few of the effects don’t hold up to today’s standards, particularly the monster fly that attacks Jody and Mike, and that’s about the only real negative there is to this film. I suppose if surreal, “confusing” horror isn’t your thing, then Phantasm might not be for you. But for the most part, this film has something for everybody.

Phantasm is certainly worthy of an A. This is a fantastic movie which spawned a fantastic franchise.