Tickled Pink by the Panther

In the 80’s, humor was largely characterized by Mel Brooks movies that tried to outdo each other on a factor of cheesiness. Movies such as Spaceballs and Hot Shots: Part Deux were the guilty pleasures that indulged our funny bones. From the 70’s, however, we retained the meanstreak of adult-themed comedy such as Animal House and Porky’s. As the 90’s came and went, the line between cheesy absurdism and raunchy humor was merged into bizarre hybrids that could take the form of anything from an Adam Sandler movie to a grossly typical movie simply focused on teenage sexual escapades. Nowadays, comedies seem to be judged by the bar of absurdity that each new release can set: can one scene possibly be nastier than the last, or one visual image be more random than the last Ben Stiller monkey-fest? 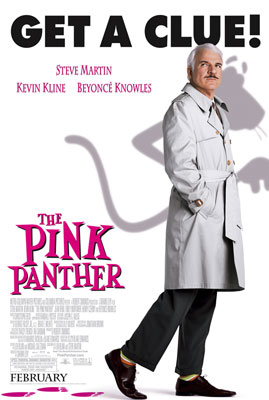 It is perhaps for this reason that people seemed to feel that The Pink Panther, with its French-mocking trailers, could not stand a chance when compared to recent comedies such as Wedding Crashers and The 40 Year Old Virgin, both of which are obviously of mature humor. But oddly enough, The Pink Panther works as a breath of fresh air in the sea of sex and absurdity that has been the staple of recent witticism.

Our protagonist, Jacques Clouseau (Steve Martin), is the most incompetent gendarme (cop) in all of France. Chief Inspector Dreyfus (Kevin Kline) promotes Clouseau to the level of Inspector in order to solve the murder of French soccer coach Yves Gluant (Jason Statham), hoping that his buffoonery will distract the media while Dreyfus seizes the opportunity to solve the case on the side and win France’s coveted Medal of Honor.

What happens next follows Clouseau and his faithful driver, Ponton (Jean Reno), as they follow a series of illogical leads with Clouseau helming each crime scene investigation while Ponton deduces what is really happening.

True, the bulk of the movie’s hilarity navigates around the assumption that you enjoy a stupid Frenchman. If you don’t enjoy that, you’re probably a hippie and will most likely be miserable for the next hour and forty five minutes. And trust me, there are an innumerable moments of utter stupidity on Clouseau’s part that involve slapstick, word play, illogical conclusions, and the downright bizarre. It definitely has its own sense of humor that is different yet in the same vein as the goofy spontaneity of Dodgeball and Anchorman but still retaining the level of maturity of Wedding Crashers. Ok, scratch that: if Wedding Crashers is mature, The Pink Panther is the stupidest fat kid in 8th grade. But it’s fun to watch.

Steve Martin’s Clouseau is an amazing caricature of a Frenchman. His bumbling idiocy is only annoying at parts involving repetition (which happens twice in the film: once when he’s trying to park a SMART car, the other when he feels the need to karate chop the curtains upon entering someone’s room) and is, by and large, amusing in its implausibility. Jean Reno, Clive Owen, and Kevin Kline all play humorous supporting roles and give a great catharsis of intelligence to oppose Clouseau’s antics.

The movie runs at a consistent pace and is amusing from start to finish, provided that you think it’s funny from the start.