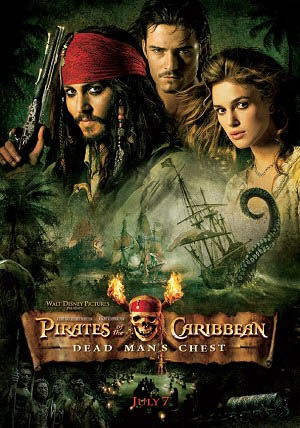 The previous film, Pirates of the Caribbean: Curse of the Black Pearl, was in many ways the quintessential pirate-movie; working in all the clichés and expectations of a pirate-theme but wrapping them around an engaging plot with magnificent actors, inspired directing, near-flawless special effects and Johnny Depp. Well, expect more of the same with this installment. Dead Man’s Chest takes all the pirate elements and clichés left out of the last film, breathes new life into them and turns them into movie-gold. Who would’ve thought the lead singer of the Monkees could be so badass?

As the story goes, William and Elizabeth Turner are set to be executed for helping Cap’n Jack Sparrow escape the hangman’s noose at the end of the last film. The head of the East India Trading Company offers William a deal: their lives if he can bring back Cap’n Jack’s compass. At the same time, Cap’n Jack is visited by the spirit of Boot-strap Bill Turner (William Turner’s pirate daddy). It would seem that Jack sold his soul to Davy Jones in exchange for 13 years of being Captain of the Black Pearl. Well, time’s up and Davy Jones wants to collect. To ensure he receives him, Jones unleashes the terrible Kraken to hunt Sparrow to the ends of the Earth. Well, the only way out of that mess is to find the key to a chest. Then they gotta find the chest-itself. THEN they gotta use whatever’s in the chest to take down Davy Jones. The cast members gradually reunite along the way and we’re treated to another pirate epic.

So that’s the basic premise in a nutshell, yes. But you get all that AND cannibals, voodoo witches, sword fights-galore, barnacle-encrusted freaks and even a cameo from one of the Street Sharks, desperate for work. This film is totally Jawsome.

While all the elements serve to carry the story quite well, what really keeps the audience engaged is the cast of characters and their interactions with one-another. Needless to say, there’s the ever charismatic Cap’n Jack Sparrow stealing the show at every turn with his bizarre sense of humor, but there’s more than just Johnny Depp to keep you entertained. Two of the enemy pirates from the first movie are back and hook-up with the Black Pearl’s crew (you’ll know em when you see em) and they deliver a great number of comedic bits. The entire cast seems to hate each other one minute and love each other the next, depending on the circumstances.

The whole movie has a sense of humor to it which balances out some of the frightening and grotesque elements, much like in the last movie. The Flying Dutchman’s demonic crew are quite startling, as are scenes of prisoners rotting alive or having their eyeballs plucked out by ravenous crows. The movie can be extremely dark and violent, perhaps too much so for young children. Yet, as I type this, I remember all the kids in the theater with me cheering in joy through-out the whole film; laughing at all of Jack Sparrow’s antics. So perhaps I don’t give kids enough credit when it comes to gore and monsters.

The special effects are magnificent. Davy Jones looks like Cthulhu in a pirate outfit and you totally buy it. The Kraken is a sight to behold, as it rips barges to pieces and plucks sailors by its tentacles and drops them into its gaping maw. The Kraken suffers from the only instances of sketchy special effects (with a few blatant blue-screen moments), but it’s really only a minor complaint at the most.

This movie just has so much working in its favor I find it hard to select any problems. I suppose my only disappointment was the lack of resolution to the plot; as this movie is the “Empire Strikes Back” installment of the trilogy in more ways than just sequence. I won’t give anything away, but the ending will leave you feeling a bit empty. Anxious for the next movie, yes, but slightly unsatisfied as the plot remains unresolved.

Over all, the Pirates of the Caribbean: Dead Man’s Chest is just as energetic, clever and entertaining as the original, but now with 100% more blowfish-people. It’s definitely a fitting sequel; this franchise is going to be the most incredible pirate epic of all-time.