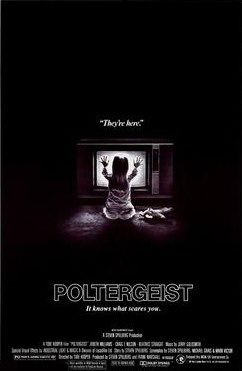 Up there with the Shining as one of my favorite haunted house films of all-time, Poltergeist just doesn’t feel like its 24 years old. The setting, the special effects, the acting…it has all withstood the test of time gracefully. Though I’m afraid I can’t say the same for this film’s despicable sequels (Poltergeist II: the Other Side and Poltergeist III).

The Freeling family lives a rather bland, normal life in the suburbs of Cuesta Verde, California. Everything is going along A-okay until one day, strange things begin to happen. Furniture moves on its own, the house trembles and shakes, and their young daughter, Carol Anne, is seen talking with mysterious people living inside their television set. The haunting soon escalates from harmless to malicious, as the house begins to attack the family with a seemingly murderous intent. In the confusion of one attack, Carol Anne goes missing. Her voice can be heard within the television set and the walls of the home, but her body is nowhere to be found. The Freeling family will have to fight a great, otherwordly evil if they wish to save their daughter.

While most haunted house films before it were more low-key, psychological horror films, relying on spooky noises and maybe the occasional spectral presence, Poltergeist comes in and blows all that out of the water with incredible special effects and tons of action. The effects, provided by Industrial Light and Magic, are glorious in both their beauty and their occasional grotesquery. This movie, produced by Stephen Spielberg and directed by Tobe Hooper, is very much a fusion of the two filmmakers’ styles. It has that warm and fuzzy Spielberg feeling, with lots of soft music and adorable children, but lurking beneath that is Tobe Hooper, who stabs you in the gut when you least expect it with gore, evil clowns and a garden of corpses. It’s sort of a “good cop-bad cop” kind of approach, with Spielberg giving the audience a sense of security just long enough for Tobe Hooper to burst through the door with a chainsaw.

There is lots of terrifying imagery to keep this film well away from the “kid’s movie” status associated with most Spielberg projects. Raw steak mutilating itself, squirming maggots, ghostly demonic beasts, corpses erupting from the ground and, of course, the unforgettable bit where a man peels the flesh off his own face. And that’s only the tip of the iceberg. I haven’t even gotten to the killer clown or the man-eating tree, yet. There are so many memorable, frightening moments in this film, it’s hard to keep track of them all.

Now, I suppose the one beef I have with this film is that, well, it’s *not* a poltergeist. Poltergeists are loud, noisy spirits, but are mostly harmless. They certainly don’t transform your bedroom closet into a Sarlaac Pit and try to eat you. There are a few moments early in the film that exhibit truly poltergeist activity, such as the stacking kitchen chairs or the force which can move someone across a floor, harmlessly. Movies like the original “Haunting” are more in tune with what a poltergeist really is.

That little nit-pick aside, Poltergeist is a great haunted house picture. Lots of magnificent special effects that never seem to age, as well as some great acting and creepy atmosphere.