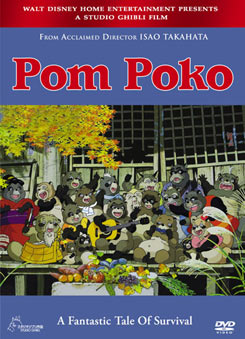 A theme Studio Ghibli flicks seem to be very fond of is the standard “Nature: Good, People: Bad” morality tale we’re all a little sick of in these Post-Captain Planet generation. While “Naussicaa” and “Princess Mononoke” beat you over the head with the lesson using dark and violent imagery, “Pom Poko” goes a more whimsical route, showing us everything from the perspective of a clan of magical raccoons living in Tama Hills during the big redevelopment era. Director and writer Isao Takahata manages to drive home the worthy moral to the audience but without ever skimping on the humor and charm, which I personally find much more entertaining than Miyazaki’s usual method of getting the notion across: “Step on a flower and giant monsters will kill you”.

In order to provide more suburban living quarters around the Japanese capital city of Tokyo, human developers began tearing apart the forests of Tama Hills with little concern for the wildlife which dwelled therein. Living in Tama Hills is a clan of magical raccoons capable of transforming into any appearance they wish. The raccoons of Tama Hills are desperate to stop the developers but their instinctual jovial nature and short attention spans doom them to a string of constant losses. With Tama Hills growing ever smaller, the raccoons finally decide to knuckle-down and fight back. On one side is the violent and ill-tempered Gonta (Clancy Brown), who wishes to wage deadly war on the humans, on the other side is Shokichi (Jonathan Taylor Thomas), a young raccoon who thinks that humans and raccoons can live side-by-side if only they can learn to get along.

When I stuck in “Pom Poko” I was expecting something akin to “Watership Down”, an animated film with a similar theme revolving around a civilization of rabbits trying to cope with human developers destroying their land and driving them away. However, within minutes I discovered that while “Pom Poko” shares a few similarities with the dark and creepy “Watership Down”, the two films were as different as night and day. The raccoons in this film, as is made expressly clear, are fun-loving partiers at heart. No matter how cramped and uncomfortable their life gets or how frustrating their lack of progress with the humans becomes, they always find time to party and have fun. And I think that’s what makes this film so mesmerizing; it’s just so much fun.

The film is told from the perspective of an omniscient narrator (Maurice LaMarche) whose identity is revealed at the end. We learn all the complexities and history of raccoon civilization; why they transform and how they’ve coexisted with humans for so many centuries. Based on the famous Japanese folk legends about the “tanuki”, the film has a wealth of history to dip into, making it all very deep, fascinating and enchanting. Anyone familiar with those tales are probably acquainted with the tanuki’s rather…um…sizeable “pouch”. Well, sure, you see raccoon testicles in this movie, a lot of raccoon testicles, but they’re never used in any sort of explicit or disgusting manner. The use of their dangly parts as shapeshifting aids is all very whimsical and harmless; only the staunchest of prudes would deprive their children from seeing this movie just because of the ever-present raccoon balls.

With that tangent out of the way, I’d like to delve into this film’s animation accomplishments. Studio Ghibli regularly blows the competition away with the achievements of its animation, but I think what makes “Pom Poko” stand out are the marvelous transformation effects. The characters turn into anything and everything and it all looks so smooth and natural you won’t want to blink or risk missing a single frame of gorgeous animation. The raccoons start the film out as novice shapeshifters, but as the story progresses (spanning a few years) and their skills increase, the transformation effects become grander and grander until you can’t imagine how much more impressive they can get.

While the film has a very fun and charming atmosphere, Takahata knows when to mix in the right amount of tragedy and sacrifice to darken the mood and draw us closer to the characters. And yet, keeping with the natural fun-loving instincts of the raccoons, these tear-jerking moments only last just as long as they have to and rarely risk depressing the audience. True, the ending is quite somber, yet simultaneously it is very uplifting and light-hearted. A very odd balance indeed, but Takahata manages it with tremendous success.

Once again, Disney assembles a fantastic cast for this Ghibli release. They’ve been giving these Ghibli films the “royal treatment”, so to speak, bringing together all the perfect actors for each and every role. LaMarche’s voice narrates the film with a great attitude; very deadpan but with subtle hints of humor where necessary. Clancy Brown almost steals the show as Gonta, managing to transition from his violent “Kurgan” voice to a goofy and silly one at the drop of a hat. Jonathan Taylor Thomas’ performance as Shokichi wasn’t spectacular but still very pleasant, and as well all know, he’s no stranger to voice acting. Tress MacNeille is wonderful as the rigid old lady raccoon, Oroku, channeling her usual voice of authority. Kevin Michael Richardson had me in stitches with his portrayal of the owner of the Wonderland amusement park. One of Richardson’s most marketable voices is his absolutely side-splitting Bill Cosby impression (check out “Family Guy” and “Codename: Kids Next Door” for more of it) and he uses a voice very similar for the theme park owner. Granted, it’s not entirely “Bill Cosby”, but just enough to keep me laughing.

Of all of Studio Ghibli’s “environmental” pieces, I found this to be the most entertaining. It delivers a grim and important message to the audience but manages to get it across in a manner that never ceases to be fun. If you don’t mind watching gigantic raccoon testicles mutate into boulders then I can’t think of any reason one couldn’t enjoy this movie.