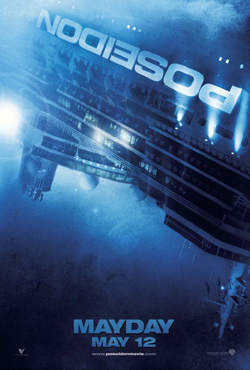 Before I get into the details of this highly-advertised remake, let us first inspect what made the original Poseidon Adventure such a popular, fondly remembered film. Firstly, “for its time” it employed some very clever set-designs. All the sets were constructed normally and then flipped upside down to simulate the idea of an over-turned boat more believably. Then, there was the cast of *good* actors assembled for the flick; Gene Hackman, Roddy McDowell, Red Buttons and, of course, The Borgnine.

So does this multi-million dollar action adventure special effects thrill ride remake capture the entertainment value of the original?

In case you couldn’t figure it out from the trailer, a luxury cruise ship called “Poseidon” gets overturned by a massive wave. The ship is upside down, sinking fast, and a small group of passengers have to race against time to get out of the ship before it sinks completely.

That’s it. That’s the whole plot. To be fair, the original didn’t employ much more depth, but basically everything you need to know about the movie you got from the first 30 seconds of the TV commercial with the mute-button on.

What made the original such a fun flick was that it was very original and very clever “For its time”. This remake is nothing impressive, these days. The effects lack the nostalgic-factor of the original and, especially with it being a remake, the whole thing seems very predictable and boring.

Poseidon also lacks the fun, talented cast that made the water-thin plot of the original so dynamic. Even all-stars like Kurt Russell and Richard Dreyfuss feel painfully hackneyed due to, well, painfully hackneyed character’s that never seemed to make it past the template-stage.

It also deserves kudos for getting that irritating hair-bag from the Black Eyed Peas to sing a song ten-times more annoying than “There has to be a Morning After”. It’s like they took the worst part of the original and turned the dial up.

Poseidon can be chalked-up as yet another unnecessary remake derived from Hollywood’s current lack of imagination and talent. You’re better off just ignoring it or renting the original.

I give it a D+. Needs more Borgnine.