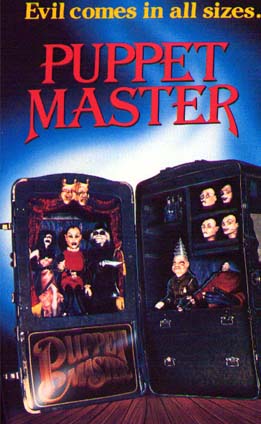 Along with the Critters and Tremors franchises, the Puppet Master series was an instrumental part of my childhood television experience. I anxiously awaited every new installment, as they typically premiered on the Sci-Fi Channel or USA Network. I couldn’t get enough of the series, and even though it self-destructed immediately after part 5, the Puppet Master films remain one of my fondest memories. And, like many a horror series, the original Puppet Master is considered the best.

In 1939, the elderly puppet master, Andre Toulin (William Hickey), killed himself in his room at the Bodega Bay Hotel in order to keep his secrets out of the hands of the Nazis. Toulin had discovered an ancient Egyptian formula to grant life to inanimate objects and hid his secret somewhere within the hotel. In the present day, 4 psychics are called down to the off-season Bodega Bay Hotel for the funeral of the hotel’s owner, Neil Galagher, who had been their friend and rival. No sooner do they arrive at the hotel, sentient killer puppets begin to crawl out of the woodwork, hunting the psychics down, one at a time.

In his prime, Charles Band was the master of “killer toy” horror movies, with the likes of Demonic Toys and Dolls under his belt along with the Puppet Master franchise. Puppet Master was one of his strongest works and the flagship series of Full Moon Entertainment.

What really carries the Puppet Master films, and this one in particular, is the colorful cast of little wooden monsters (they eventually became popular enough to earn their very own toyline). There’s the leader of the puppets and perennial favorite, Blade, who sports a black trench coat, fedorah, spikes for eyes and a hook and knife in place of his hands. Pinhead (not to be confused with the character from Hellraiser) is the strongman of the puppets, with huge human-sized hands that are perfect for breaking ankles and punching women in the eye. Tunneller has a drill for a head, and you can probably guess what he does with it. There’s Jester, the pacifist of the puppets, who never really hurts anyone but is memorable for his spinning head and changing facial expressions. And finally, there’s my favorite puppet of the lot, Leech Woman, who can vomit up gigantic leeches on her prey.

The puppet effects in this film are some of the best, as they rarely skimp on the stop-motion animation. I’m a sucker for stop-motion effects, and I always get a kick out of that first scene where Blade startles a fat lady walking down the hallway and screams at her. Later Puppet Master films would do away with the stop-motion out of cost, which if you ask me, just sucks away a part of the film’s soul.

The story is pretty good, though the lead villain is overall rather lame. The way he foils himself in the end is particularly stupid. One thing that has always bothered me about the film is this complete “WTF” moment at the very end. One of the villains’ undead slaves bursts out with a firepoker and screams “Don’t touch the body!” The scene then changes to the climax, the film ends and…that’s it. You’re left thinking, “What was THAT all about!?” I assume something was lost on the editor’s floor, some place.

The Puppet Master franchise, at least up through part 5, are some of the best “killer toy” films ever made, even giving Child’s Play a run for its money. Definitely worth a look whenever they show up on TV, which isn’t as often as it used to be, unfortunately.