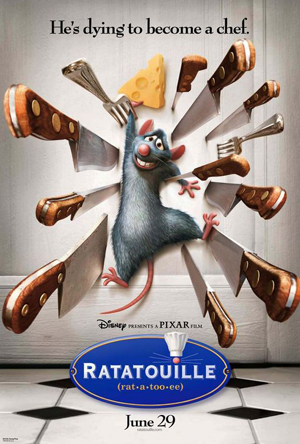 I’m well aware that I have a tendency to epically rail against CG-animated featured films, as I lament the tragic death of traditional cel-animation in regards to theatrical releases. And although it does tend to come across as an unhealthy bias, even my crotchety old preference for traditional animation can’t deny that Pixar-produced films always have a quality to them which catapults them far ahead of the “Doogle”s and the “Ice Age 2”s of the industry. I won’t say I’ve enjoyed every Pixar offering, I found both “A Bug’s Life” and “Cars” to be a tad underwhelming, but after carefully digesting their latest offering, “Ratatouille”, I can’t deny that those Pixar fellows know how to warm my heart with that thar space age 3D cartoon-stuff.

Remy (Patton Oswalt) is a rat living in Paris. Blessed with a keen sense of taste and smell, Remy has sworn off the typical garbage-devouring ways of his kin and developed a love of cooking. Inspired by a hallucination of his hero, Chef Gusteau (Brad Garrett), Remy happens upon his late idol’s kitchen and a clumsy garbage boy named Linguini (Lou Romano). Linguini wants to be a chef, but his taste buds are the equivalent of being tone death. Lucky for him, Remy has all the talent he needs and the two become partners. Their rise to the top won’t be an easy one, though, as standing in their way is the restaurant’s head chef, Skinner (Ian Holm), and the grim food critic, Anton Ego (Peter O’Toole), whose reviews can make or break a chef’s entire career.

There’s something about Pixar films which set them above other animated films of the same variety. While the “Shrek”s of the world rope in a broader audience with bathroom humor and other lowbrow tactics under the guise of “maturity”, Pixar manages to appeal to a wider range of ages and preferences with, and I don’t typically feel comfortable throwing this word around, a more sophisticated presence in both the story and animation departments. At the end of the day, “Ratatouille” and Pixar’s other offerings are children’s films. We all know the standard structure: the unlikely heroes emerge from humble beginnings, face their fears to achieve success, their fears get the best of them just before their greatest test, all hope seems lost until they are inspired to take a stand and in the end everything works out A-okay. Perhaps the approach is a shade overdone, but like a meal, it’s not the ingredients that make it delicious, but the proportions those ingredients are used, the presentation of the dish, and perhaps most importantly, who is crafting the meal.

The characters are perhaps a bit predictable. Remy is your usual “doesn’t want to follow in his father’s footsteps and must carve his own path in life” type of guy, but Patton Oswalt gives him a fun presence and carries the character template to its fullest. Linguini is the lovable oaf of the film who inevitably gets the girl and eventually finds his true calling, but while his antics can get a bit tiresome he rarely crosses the line into “annoying” territory. The aforementioned girl is Corlette voiced by Jeneane Garofalo doing a surprisingly convincing French accent. The closest thing this installment has to the “goofy sidekick” cliché is the disembodied spectre/hallucination of Gusteau who follows Remy around and provides him with inspirational advice at just the right moments. Brad Garrett’s been one of my favorite voice actors since “Two Stupid Dogs” and he did a fantastic job with this character. Gusteau is more along the lines of a “Yoda” to Remy’s “Luke”, and while he does provide some pleasant comic relief, he never comes across as being shoehorned into scenes for that purpose.

The villains are both good and bad. I found Skinner to be a bit too “Dick Dastardly” in his villainy and toward the end of the film he began to drift into the scenery as the next and more interesting opponent, Anton Ego, took the stage. Ego reminded me greatly of Boris Karloff, or more specifically, the Grinch. While he’s certainly evil (at least by food critic standards), he’s a kind of endearing sort of evil you can’t help but smile at.

I think “Ratatouille” falls in as one of my favorite installments in Pixar’s library. While I can’t say it trumps my all-time favorite, “the Incredibles”, it most definitely lands in my Top Three. Your kids will love it and there’s a strikingly good chance that you adults will, too.