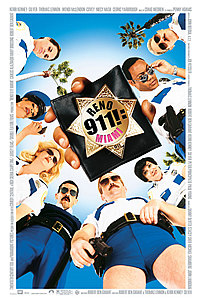 I suppose the very first thing I should mention before I start my review is that I have never seen one whole episode of Comedy Central’s “Reno 911!” television series. I came into this film as an outsider with no previous exposure to the characters and plot, save for what I’d seen in commercials and the vague notion that this was “a parody of Cops”. Well, I can’t say that the film was all bad. Indeed, it had some very inspired, hilarious moments. However, it still ranks about as high as one of the lesser sequels to “Police Academy”, and at the end of the day, “Reno 911!: Miami” is just plain mediocre.

Lieutenant Jim Dangle (Thomas Lennon) is the chief of the Reno County Sheriff’s Department; a menagerie of the finest boneheads and numbskulls law enforcement has to offer. By some stroke of happenstance, the entirety of Reno’s “finest” are invited to a police convention being held in Miami, Florida. Shortly after arrival, everyone within the convention center, which includes all visiting cops, the local police and high-ranking government officials, are rendered quarantine after a terrorist attack infects them with a deadly, contagious virus. The only law enforcement officers not present during the attack: the cast of Reno 911. The Reno County Sheriff’s Department is put in charge of keeping Miami out of the claws of chaos, which of course leads to many moments of awkwardness and numerous rascally hijinks.

The first thought that ran through my head as this film began: “God damn these people are ugly”. With that out of the way, I could try and focus on the movie. The “Reno 911” television series is, as mentioned earlier, a parody of “Cops” and reality shows of that nature. The pacing of the film is treated more like a collection of skits and odd police calls with a thin, overarching story barely stringing them together. For a film that doesn’t take itself seriously, this sort of approach actually works in its favor, but only a little.

The type of humor most prevalent in the film is of the “oh my, isn’t this awkward?” variety. A standard example would be a character says something, the other characters misinterpret what he says, do something stupid, he corrects them, they still get it wrong and they all talk and argue about it in a manner that appears “real”, thus making it “funny”. While this sort of humor works fine for a half hour comedy series (or I’m told it does, anyway), it doesn’t carry an hour and a half particularly well. Once you’ve deduced the template of the jokes, predicting them well an advance of their punchline becomes easier and easier as the film moves on. By the end, you find yourself laughing much less than when the movie started.

The cast of characters carry most of the jokes, though the assembled players are of varying quality. Deputy Trudy Wiegel (Kerry Kenny-Silver) was one of my least favorite characters, as she seemed to be saddled with the bulk of the “poop and piddle” jokes that would only make a middle schooler chortle. Deputy Raineesha Williams (Niecy Nash) embodied the “fat and sassy black woman” stereotype, a sort of character we’ve seen done to death in a million movies prior to this one. Probably the most entertaining member of the bunch is Lieutenant Dangle, the only one who seems to have anything resembling a brain cell. Deputy S. Jones (Cedric Yarbrough) also deserves some kudos for at least being the least annoying.

I’m sure “Reno 911!: Miami” will strike a chord with its intended audience: fans of the show. But as someone who doesn’t rank among that legion, I have to say that the film didn’t do much for me. It had its moments, but not a whole lot of them.