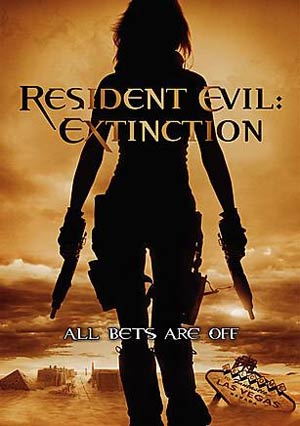 The Resident Evil film franchise started out at the bottom and somehow managed to work its way downward from there. Each installment has defied all logic by getting increasingly worse, culminating in this supposedly final chapter. If this is indeed the last installment of this utterly wretched action horror series, then praise be to Allah, we’ve been granted mercy.

Following the events of “Resident Evil: Apocalypse”, the Umbrella Corporation’s T-virus has wiped out most of humanity and turned the world into a barren wasteland infested with legions of zombies. Gun-toting genetically bred warrior maiden, Alice (Mila Jovovich), roams the endless deserts of the American southwest, fighting zombies and avoiding Umbrella’s satellite tracking systems. She eventually meets up with Claire Redfield (Ali Larter) and her convoy of forgettable stereotypes to go to Alaska or something. However, upon doing so, they all become the target of Dr. Isaacs (Lain Glen), a mad scientist under Umbrella’s employ who seeks to use Alice’s unique DNA to subjugate the world’s massive zombie population into slaves.

The Resident Evil film trilogy comes across more like Paul WS Anderson’s glorified fanfiction, with Alice as his own personal “Mary Sue” character. For those unacquainted with the term, a “Mary Sue” is an original character created and inserted into fiction, usually fanfiction, who is “all powerful”, “totally awesome”, completely devoid of depth and basically just the author’s diseased concept of what “bad ass” is. That pretty much describes Alice to a “T”, as the actual characters who star in the video games are either ignored completely or cast into empty supporting roles in order to make room for Alice doing backflips and setting zombies on fire with her inexplicable telekinetic superpowers.

Screenwriter and all-around hack, Paul WS Anderson, throws the fans a couple bones with this installment, including a couple of main characters from the games in co-starring or supporting roles. All good Resident Evil fans should recognize Claire Redfield without any trouble. Unfortunately, since all the screentime was needed to make Alice look as “cool” as possible, Claire is pretty much just your usual no-nonsense leader woman without even a scrap of real personality. The head honcho of Umbrella, Wesker (Jason O’Mara), manages a few small appearances in this installment, barking orders from the proverbial shadows. He’s actually represented somewhat accurately, as that’s usually his gig in the games.

The other original characters are just your typical cannon-fodder nobodies. There’s a cowboy guy, a black guy who dies early on because that’s a mandatory horror movie trend, some adorable children and a teenage girl named K-Mart. You read that right. For a second there, I thought I was watching “Idiocracy”.

I’m both happy and sad having now seen “Resident Evil: Extinction”. I’m happy that the series is finally over (oh please, let it be over), but I’m sad that we’re never going to get any good Resident Evil movies because of these films. At least we’ll always have the games.