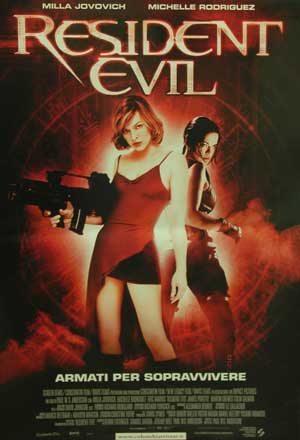 I find it baffling that Paul WS Anderson, someone who could make such a fun and perfect video game movie as “Mortal Kombat”, could turn right around and make a virtually unrecognizable and unwatchable mess like “Resident Evil”. Just about everything I enjoyed about the games, such as the atmosphere, the characters and the storyline, were mysteriously absent from this so-called “adaptation”, leaving hardcore Resident Evil fans such as myself with little to latch on to and even less to appreciate. The truly sad part is that this poorly conceived celluloid vomit puddle was seen fit to herald in a franchise, thus ensuring that a film which accurately depicts the content of the games will never see the light of day.

The Umbrella Corporation’s top secret subterranean research facility, the Hive, has had an outbreak of the “T Virus”, transforming everyone within into flesh-craving zombies. A team of crack Umbrella operatives have been given the task of rescuing any survivors from within the Hive and shut down its sentient computer mainframe, the Red Queen. Along for the ride is an amnesiac operative named Alice (Milla Jovovich) with crazy ninja powers who desperately wants to uncover her identity amidst the chaos.

For reasons I don’t understand, writer/Director Paul WS Anderson saw fit not only to change the story of the Resident Evil game, but to change the setting, ignore the atmosphere and chuck out all recognizable characters from the series as well. People can harp all they want on the inaccuracies of the “Super Mario Bros” and “Street Fighter” films, but at least they featured the characters from the games. Chris Redfield and Jill Valentine are completely absent from the film (though Jill shows up in the sequel, which is actually worse, if you can believe that) and call me selfish if you want, but when I go to see a movie based on an existing franchise I’d at least like to see one familiar face.

The new characters Anderson chose to give us are so irritating or completely devoid of depth that they don’t endear themselves to the audience at all. Add to that the fact that the casting for the film was so horrendous that it makes the actors in straight-to-video offerings like “Ghoulies IV” look like master thespians. Alice’s convoluted backstory won’t be really touched upon until the sequel, making her rather boring in this installment, with the only thing allowing her stand out being her ability to kill zombie dogs with high-flying ninja jumpkicks. As I mentioned in my review for “Ultra Violet”, Milla Jovovich has some sort of physical deformity which prevents her from closing her mouth all the way for any period longer than six seconds. This can be absolutely distracting during important scenes, as all I can focus on is Jovovich’s jaw gaping to the floor, half expecting a steady stream of drool to start dribbling down her chin. The only other stand out character is a generic “super bitch” named Rain, so obnoxiously brought to life by Michelle Rodriguez that you’ll find yourself counting the minutes until she dies (sadly, she survives through practically the entire film). I don’t know whether she has some sort of neck disorder or whether her “masterful” acting skills told her this was the only way to look tough, but Rodriguez keeps her head tilted down throughout the entire film. That means that her eyeballs are always rolled up at the top of the sockets and she looks absolutely stupid. When your two leads have completely distracting physical setbacks that they remove you from the experience, then you know you screwed up somewhere in the casting department.

So what about the rest of the cast? Well, most of them are killed off shortly after being introduced, all at once and not by zombies. That’s some mighty fine writing, right there. The ones that remain are so devoid of anything even remotely approaching memorable performances that they just run together into a blur of worthlessness.

Anderson manages to throw a few scraps from the games in, likely only by accident. The mansion which was the setting of the original game appears here but only briefly at the beginning and end. The final battle at the film’s climax features a recognizable monster from the games: the Licker. Sadly, the Licker is brought to life with such primitive, cheap and downright laughable CGI that it is anything but “cool”. This movie was made in 2002 but the CGI looks like it stepped out of 1992. What could have been the film’s one redeeming attribute was utterly botched. Speaking of villains and CGI, for some reason Anderson thought it would be totally rad to make the Hive’s sentient computer system, the Red Queen, a holographic prepubescent British girl. It’s as stupid as it sounds.

“Resident Evil” is constantly praised as one of the greatest live action video game movies of all time, but I frankly cannot see the attraction. It throws away pretty much everything that made the original games fun or frightening and replaces it all with generic action sequences and even more generic characters. Paul WS Anderson’s career started out on such a good track, but after the “Resident Evil” franchise and the lackluster “Alien vs. Predator”, I’m starting to think his early successes were nothing short of flukes.