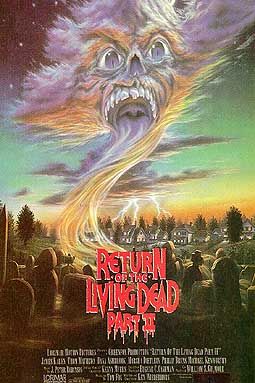 Ugh, this movie was just as bad as everyone says it is. But that can’t be too hard to believe, can it? Which is a real shame, too, as the original Return of the Living Dead is one of the best zombie movies, not only of its time, but ever. Its also one of the funniest dark comedies available that never shoves too much slapstick down your throat but never takes itself too seriously, either.

The sequel? Not so much.

First off, any time a horror movie decides to make a kid or kids the star it usually ends up a nightmare to watch. Mostly because the kids can’t act; and these kids COULDN’T act. Well, all except for “The Guy who Played Tommy Jarvis in Friday the 13th Part VI”. He was cool.

The original “Return” was a perfect blend of horror, special effects and very dark comedy. This one was an over-the-top comedy that just wasn’t funny at all. Honestly, the talking severed head with a southern accent? Who the Hell laughed at that? “Git dat gosh dang screw drivah outta mah head!” Lame, just lame.

I dug that we got to see another Tarman when they first break open the tank, but it’s a shame he only got about 1 minute of screentime. He didn’t look as good as the Tarman from the first flick, anyway. Still, whether it’s “the” Tarman or “a” Tarman, he’s still the mascot of the franchise and I’m glad we got to see a version of him.

And speaking of the zombies, anybody notice that they kept reusing the same zombies over and over again, even after they got their heads blown up or run over in previous scenes? The one male zombie in the black and white suit with shoulder-length black hair kept showing up over and over again. I swear, they caved his skull in a half dozen times.

The DVD is pretty decent for such a poor movie, though. A director’s commentary (which I haven’t listened to), a trailer and a really good picture transfer. Not that the movie deserved such a fancy presentation.

The one thing I will say I like about the Return of the Living Dead franchise is the concept of a Zombie Anthology Series, centered around the various missing canisters of 245 Trioxcide and the zombie-related effects they have on those who open them up. It’s a cool concept that provides so much potential, yet sadly, most of the sequels squander it. Especially this one.

I’d give the movie an F. There were some decent zombie effects, particularly the bit in the hospital when the zombie gets sliced in half but crawls around anyway. However it goes overboard with the slapstick comedy and only manages to deliver maybe 2 or 3 solid laughs, total.