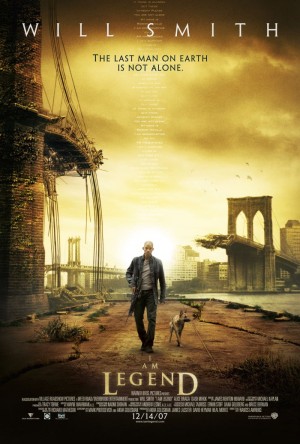 One of the most searing movie memories of my childhood was Charlton Heston’s Omega Man. This movie is permanently a part of my childhood memories because I would often see this movie being shown in one of TV channels almost every month – in the morning. When people talk about Charlton Heston they always reference his work in Ben Hur or El Cid or The Ten Commandments or Planet of The Apes. But for me Heston will always be Robert Neville and Omega Man IS Charlton Heston for me.

Omega man was based on the novel I Am Legend by Richard Matheson. Omega Man took some liberties with the original story about the last man on earth who is besieged by vampires. The whole concept has actually been done before one over time in The Last Man on Earth starring Vincent Price.

The news that was going to make a movie that is based on Matheson’s novel got may attention. “There could be a possibility that they surpass Omega Man this time,” I thought to myself.

Unfortunately, it did not.

The new movie stars superstar Will Smith in what I really thought would be a more faithful retelling of the Matheson novel that I have also gone to love. But this being , many liberties were taken with the plot and a whole new ending was concocted. I have to say that this is no way to treat a “legend” a of a story.

In this new interpretation, Will Smith plays a military colonel who was tasked to find a cure for a viral epidemic that is decimating humanity. What was thought to be the cure for cancer turned out to have far more devastating effects and the end result was that Smith was the only one who survived because of the natural immunity he had to the disease. He is now the last man on earth and forced to survive while still trying to find a cure that will save humanity from the brink of extinction.

Will Smith has really grown by leaps and bounds as an actor. The man is steadily improving and in I Am Legend he has proven that he can carry a whole movie just on the strength of his presence and skill alone. Smith appeared in practically every frame in the movie except for one or two scenes. The fact that he manages to pull you in as Robert Neville – a guy who is trying to live normally while knowing that at every turn danger awaits him especially at night. Seeing how Neville lives in the face of such danger is quite interesting and he really makes the mundane look far more interesting than it really is.

The other “major” character in the movie, the dog companion of Neville was also effectively transformed into an integral character. Credit should go to Director Francis Lawrence for effectively using the dog without making it look like a parody of a human character – my main gripe with almost all movies that involves “intelligent” animals. Yes, I’m referring to those asinine Beethoven movies and those movies that turn animals intot these cute clowns where you actually half expect them to suddenly talk or for dialogue balloons to pop up on top of their heads.

The whole atmosphere was really effective, too. has turned into a third character in this movie – the city is poetic, barren, dangerous, ominous and uplifting. Definite kudos for this.

In fact, actually did a decent job here. He has managed to bring the understated flash that he used in to this movie without it overshadowing the fact that this is a character piece and not an action movie (which most detractors of the movie were expecting).

I guess my biggest gripe about the movie is that there was a definite lack of trust in the source material. You can see it in the way many liberties were taken with the character of Neville and, most disappointingly, in the skewed ending that sought to change the whole meaning of the whole “I Am Legend” title. I had hoped that guys behind the movie had really taken the whole essence of the “Legend” mythos to the big screen because it is more poignant and has real emotional resonance. I felt that the deviation made was an attempt to dumb down the movie and make everything cut and dried, which is a shame because this was a wonderful opportunity to really bring Matheson’s novel in a purer manner, which the book really deserves.

Overall, I am Legend is a decent effort with a number of disappointments, fortunately, the disappointments are not that big, but then the efforts were not too stellar either.