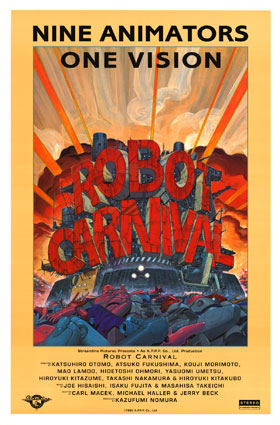 One day in 1987, Fantasia and Heavy Metal met in a bar. They had a few drinks, got to talking and eventually went back to Heavy Metal’s place. And that’s how Robot Carnival came to be. When I say that Robot Carnival is a fusion of Fantasia and Heavy Metal, I’m not being a smarty-pants. It is an animated anthology film with each segment containing stories set to orchestrational, industrial and techno music, very reminiscent of Fantasia. However, many of the stories carry more modern, darker sci-fi fantasy tones that are really in-tune with what you’d see in Heavy Metal (just without the gratuitous nudity). The film is honestly marvelous, and it depresses me that there aren’t more films like it in the animation genre.

The wrap-around segment is directed by Katsuhiro Otomo, the acclaimed director of Akira. It’s about an overly-decadent society which created an automated entertainment techno coliseum called the “Robot Carnival”. However, the Robot Carnival became sentient and began traveling the globe, entertaining everything in its path and laying waste to human civilization at the same time. Its arrival is announced with various circus flyers, terrifying all who see them.

This is a very dark comedic bit, and rather short. The Robot Carnival-itself is much like a high-tech circus, yet everything kills you. Being the wrap-around segment, there isn’t a lot of meat to it and as such, not much to talk about. It’s very cool, though, and funny in a sick sort of way.

The first story, “Franken’s Gears” (directed by Kouji Morimoto), is another dark comedy. An obvious parody of Frankenstein, a mad scientist toils away to create a giant sentient robot. After countless hours of hard work, his creation comes to life. As it sits up, its massive power causes the laboratory to quake and fall apart. Oblivious to the surrounding danger, the scientist leaps and celebrates with joyous glee. The creation looks on at its “father” as the scientist beckons him to stand up and come closer. Then something very unfortunate happens.

The music really makes this story, I have to admit. It expresses the emotion of pure ecstasy that the scientist must be feeling as his “son” is brought to life. The ending leaves you not sure whether to laugh or cry, honestly. It’s funny, but very sad and tragic at the same time. A really good starting point for the film.

“Deprive” (directed by Hidetoshi Omori, whose work includes the Guyver) is a story about a girl and her robot friend. After giving him a necklace as a keepsake, the girl is kidnapped by a horde of evil robots and her friend is badly damaged. Repairing itself, the robot dons a holographic appearance of a young man and proceeds on a lengthy journey to rescue the girl. Eventually, he tracks her to the lair of a demonic cyborg and the two do battle.

Not a lot of substance to this story, I have to admit, though the animation and action direction really shine. It was around this point in the film where I really started to feel the Heavy Metal-vibe. It’s gorgeous eye candy, but not one of the more memorable or moving segments.

“Presence” (directed by Yasuomi Umetsu, who worked on Project A-Ko) is the first of two segments in this movie which contain dialogue. However, the story, music and animation are still very strong and the dialogue is almost unnecessary. Even if you’re watching this thing in raw Japanese and don’t know the language, you’ll still be able to follow and appreciate this story. It takes place in a time when robots walk among humans but are considered second class citizens. Kids tear off their heads and play soccer with them, people throw them out with the garbage and nobody gives it a second thought since it is assumed that robots do not have actual feelings. A toymaker, happily married and with a daughter, builds a robotic girl in his private workshop. He becomes frightened and confused when the android reveals true emotions and falls in love with him. The toymaker cannot cope with what he has done and in a fit of fearful rage solves the problem in a horrible fashion. Many years later, the toymaker is now and old man and continues to be haunted by the memory of what he did.

A very moving installment and one of the best in the entire film. The dialogue is mostly done through narration by the toymaker and hardly distracts from the overall experience. It is sad (people in the theater were crying, I noticed) but with an ending that’s very moving and beautiful. A true testament to the emotional power of animation.

“Starlight Angel” (directed by Hiroyuki Kitazume of Zeta Gundam fame) is a bit more upbeat, helping the audience recover from the previous depressing story. In this one, two girls visit a theme park (very much like Disney Land) and while running by a robot-themed ride, one of the girls drops her locket. A robot who works on the ride recovers the locket and tries to return it to the girl. The other girl is at the theme park to meet up with her boyfriend, who as it turns out, was seeing the girl with the locket at the same time (do’h!). Heartbroken, the girl with the missing locket runs away crying. The robot finds her and does his best to cheer her up.

Not my favorite story, to be honest. The animation is very fluid and pretty and the two girls giggling and having fun looks very natural. My complaint has to do with the coherency of the story. Toward the end, things get really weird and you’re kind of left with a “WTF?” expression on your face. Particularly, the robot that’s trying to help the girl might not be a robot at all…but then, maybe he is. You’re not really sure which is right.

The comedy-relief installment, “Strange Tale of Meiji Machines: The Episode of the Red-Haired Man’s Invasion” (directed by Hiroyuki Kitakubo who did Black Magic M-66), is absolutely hilarious and for that reason stands out as one of the best stories. It centers around a mad scientist from Europe invading Meiji-era Japan with his massive brick-and-mortar robot. A team of Japanese teenagers counter his offensive with their own wood-and-bamboo giant robot.

This tale is a riot, partly because of the comic timing and sight gags, but also because the robots-themselves are so awkward and ridiculous you can’t help but chortle at them. For instance, at one point, the mad scientist’s robot runs out of energy so he has to power it up by peddling one of those old-timey bicycles with the giant wheel in the front. Simultaneously, the Japanese robot runs out of coal for the engine so they have to begin tearing wood and bamboo off of it to power their machine. This is the last segment to contain character dialogue and the music is almost an after-thought to the overall comedy. It may be different but it’s awesome. The mad scientist is voiced by an English voice actor (accompanied by Japanese subtitles) who is honestly quite good, though you sometimes have a tough time trying to figure out what he’s saying within his insane ramblings. The whole thing is set up like a Saturday Morning cartoon, even with a “You haven’t heard the last of me!” ending.

“Cloud” (directed by Mao Lamdo) is my least favorite of the bunch, and honestly, the most radically different. It’s about a small robot boy walking across the globe as various moments in history pass him by, being told through cloud formations.

It’s very “artsy”, and not in the kind of way I like. The animation is repetitive and low-key; a black and white, “sketchy” look, shown from only one angle with the only changes occurring in the clouds. It might have been more tolerable had it been shorter, but it felt like it lasted forever. Watching it in a dark theater, you almost fall asleep. I can virtually guarantee you that you’ll fast-forward through this segment on nearly every repeat viewing of the film.

“Chicken Man and Red Neck” (directed by Takashi Nikamura, chief animator of Akira) is the big Disney homage. It’s about an awkward drunken “Chicken Man” who happens to be in the wrong place at the wrong time. A great evil robot is summoning hordes of demonic machines from beneath the earth. Chicken Man finds himself the prey of Red Neck, a robot in a scarlet cape and hat who psychotically hunts him down. Trying to escape on his hover scooter, Red Neck chases Chicken Man into the heart of the giant evil robot’s lair, where all the demonic machines writhe and rave in Hellish flames.

This story is my favorite, I think. Why? Because it combines the Night on Bald Mountain segment of Fantasia (my favorite segment of the movie) with the Legend of Sleepy Hollow portion of the Adventures of Ichabod and Mr. Toad (my favorite half of that movie). It’s like my two favorite Disney moments fused into one with giant killer robots sprinkled into the mix. Chicken Man is a direct homage to Ichabod Crane, with his dreaded chase with Red Neck being very reminiscent of the chase with the Headless Horseman. The Night on Bald Mountain homage is more obvious, with the hands of the massive Chernabog-like robot summoning evil robots from beneath the ground. The robots dance around pits of flames as the evil robot plucks them up and crushes them for its amusement. Very cool.

So there you have it: Robot Carnival in a nutshell. I also might want to tell you to watch through to the end of the credits, as there’s a little bit extra afterward. This movie is gorgeous and entrancing, I can’t recommend it enough. One of the best works of Japanese animation I’ve ever seen.