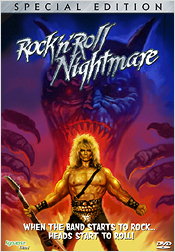 You know, I think this is my favorite “worst movie of all-time”. It’s exhaustingly terrible in every conceivable department, from the direction, to the acting, to the special effects, to the writing, and so on. Little known fact: each video cassette is infused with a small Gremlin-like monster which steals a small portion of your soul every time you watch this movie. And to make things worse, you’re going to be watching this movie more than you could every possible want to, as immediately after seeing it, you’ll want to show it to all your friends. Because watching Rock n’ Roll Nightmare is the only way to appreciate how awesomely awful it really is.

As the tale is told, Jon-Mikl Thor (played by John Mikl Thor) and his band, Triton, have holed themselves away in a remote Canadian farmhouse/recording studio so they can finish their latest album. Little do these imbeciles know, the farmhouse was the location of a grisly murder several years back, and in reality, is the nexus between Hell and Earth. But that’s okay, because all these guys wanna do is SUCK! Er, I mean…ROCK! As the troop of ridiculous stereotypes have disgusting sex every other minute (these people aren’t attractive-enough to warrant gratuitous sex scenes) and obliviously maneuver around rubber puppets that vomit in their coffee, a malevolent force picks them off one-by-one. In the end, the only one who can stop the rampaging “Bub” (short for “Beelzebub”) is the archangel Triton (played by Jon-Mikl Thor). But can he withstand the onslaught of Bub’s demonic starfish? They are pretty sticky, after all.

About every 10 minutes or so, they break-up the monotony of terrible acting and terrible special effects with terrible music videos. Jon-Mikl Thor leaps around in glittery outfits, howling cheesy hair metal into a microphone as the brain-dead female characters either play the keyboard or dance around like poorly-trained strippers. The “music” might be the only borderline-tolerable aspect of this movie, provided that you have a taste for late 80’s hair metal. If a soundtrack to this movie ever existed, I might be willing to buy it as a convenient means of atoning for my sins while I drive to the grocery store.

The acting isn’t just poor, it’s bankrupt. The drummer begins the movie with a (terrible) Australian accent, then graduates to a (terrible) British accent, and finally settles on a (terrible) American accent, after he gets possessed by one of those finger-puppets. I seriously wonder what nationality this guy really is, as he most-certainly wasn’t from any of the countries whose accents he tried to imitate. It’s quite possible he just had autism. Then there’s the band’s manager, a guy who looks like the President of the Ducky Fan Club (Pretty in Pink reference!). You’ll be thanking multiple deities that he dies first. Then there’s the Canadian groundskeeper. I’ll get to his big contribution, later. And, finally, there’s the writer, Intercessor, star and lead vocalist of Triton: Jon-Mikl Thor. He may very well be the most talented actor in the film…and that’s just sad.

The director (John Fasano) isn’t particularly coherent when it comes to developing tension. In one scene, the Canadian groundskeeper tells the manager about the recording studio and then gives him the keys. After the manager walks away, the groundskeeper looks sinisterly at the camera and says “You’ll see”. They then play some striking, overly-dramatic orchestrational music which then whimpers out into an “eerie” silence as the camera pans away into a bird’s eye view of the farm. And what does all this lead to? The groundskeeper standing around and then eventually getting a wheelbarrow. And before you ask, no, the wheelbarrow does not play some significant role later in the film.

The special effects budget appears to have come in at a rough total of $13.76…Canadian. The rubber puppets, demonic turkey legs, evil starfish and monster masks all look like the sort of thing you’d find in the bargain bin of a Halloween store. To give them a more “realistic” appearance, they slather the puppets down with clear goo. Yeah, that’ll do it. The ending battle, where the wobbly “Bub” puppet hurls starfish at Jon-Mikl Thor (clad only in a cape and metal-studded G-string) then clasps both his enemy’s hands and engages him in a power-struggle for 15 minutes…is the stuff of legend.

Oh yeah, and those gratuitous sex scenes? There’s far too many of them. Honestly, one would have been too many, but they pad this movie down with at least seven or eight, just for good measure. I think Jon-Mikl Thor made this movie just so he could get laid. The atrocious intercourse finally comes to a climax with Jon-Mikl Thor and some curly-haired nightmare having a gratuitous shower scene. The entire sequence makes me feel so disgusting I have to go take a shower…but then I have second thoughts. Jon-Mikl Thor might be in there.

It’s quite obvious that this film was intended to be a vehicle for Jon-Mikle Thor’s band, Triton. However, thanks to divine intervention, that vehicle crashed and burned shortly after pulling-out of the driveway. I feel it would be a crime to give this movie anything greater than an F-, but I have to admit, I love to hate this movie. I find myself watching it more times than any human being was ever intended to. I think that Gremlin has a good 45% of my soul, by now.