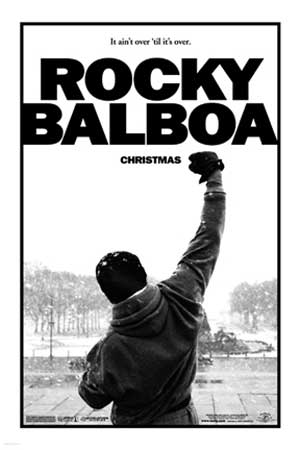 Way out here in the distant future of 2006, I would have sooner expected a remake of the classic 1976 film ‘Rocky’ than a sixth installment. Yet, much to the surprise of many, Sylvester Stallone shocked everyone when he announced he’d be writing, directing and starring in a new chapter in the boxing epic. I mean, for heaven’s sake, the guy is sixty years old! This couldn’t possibly end well.

It’s been sixteen years since Rocky Balboa (Sylvester Stallone), former heavy weight champion of the world, retired from the sport of boxing. Rocky has been going through life in his usual fashion, taking the good with the bad but always coming through. His wife, Adrian, passed away some years ago, which hurt Rocky deeply. His son (Milo Ventimiglia) has now grown up but seems to resent his father and the shadow his fame casts over his life. Rocky reunites with an old friend, Marie (Geraldine Hughes), and spends much of his time with her and her son, Steps (James Francis Kelly III), as well as running his own restaurant. Things suddenly change, though, when ESPN runs a computer simulation special, pitting Rocky-in-his-prime against the current heavy weight champion, Mason ‘the Line’ Dixon. The result is a victory for Rocky.

This spurs Rocky to come out of retirement, strictly on a local basis, fighting up-and-comers like Glass Joe, Piston Honda and King Hippo (or was that Nintendo’s Punch-Out?). However, two of Dixon’s agents decide to cash-in on the computer simulation and invite Rocky to take the champ in an exhibition bout for charity purposes. Rocky is once again the underdog, taking on a kid half his age in what will likely be the last match of his life. Rocky will have to train hard, especially since Dixon is a major asshole and doesn’t intend to pull all his punches.

In my plot summary, you’ll notice that the first paragraph going over Rocky’s personal life is longer than the second one, which covers Rocky’s training and the eventual fight. Well, that same distribution of attention also pertains to the actual film. The vast bulk of the movie centers on Rocky Balboa dealing with the death of his wife, trying to connect with his son, hanging with Paulie (Burt Young), running his restaurant, buying a dog and helping out Marie and Steps get their lives on track. There are no smaller fights leading up to the climax to break-up the monotony of Rocky’s day-to-day life. Now, some people who go into Rocky Balboa expecting an hour and a half of boxing will leave disappointed. However, I went to see Stallone playing Rocky, both as a boxer and as a human being, and that’s what I got. Stallone’s natural charisma as the character, from his lovable character quirks to his down-to-Earth life lessons, really carry the film and prevent it from getting all that “boring”. It’s more a drama than an action film, no doubt about that, but if you’re more a fan of Rocky: the Character, as opposed to Rocky: the Fighter, then you’ll enjoy yourself.

I can’t say that this film’s “bad guy”, Mason ‘the Line’ Dixon, is one of the most memorable in the Rocky franchise. In fact, I’d have to say he’s one of the weakest. He’s basically portrayed as the Terrell Owens of the boxing world: a self-absorbed youngster who thinks he’s the god of his sport, and is genuinely good at it, but knows nothing of humility, modesty or even respect. Dixon’s other big characteristic is that he’s so good, he has never been presented with a real challenge in his career. He’s fought nothing but chumps since he started, leaving many to doubt his actual skill at the sport, but inflating his ego to a massive degree. While all this is interesting and makes for a decent back-story for Rocky’s opponent, Mason ‘the Line’ Dixon has nothing on Apollo Creed, Clubber Lang or Ivan Drago. He isn’t even as deep as Tommy ‘Machine’ Gunn. Dixon’s name is more memorable than his actual character.

There are also the realists out there, who know that a 60 year-old man wouldn’t last ten seconds against the contemporary heavy weight champion of the world. While perhaps that’s true in the Real World, this is Hollywoodland we’re talking about. The exhibition match is actually played off rather realistically, and once you get a look at Stallone’s physique (this guy is sixty and he has better abs then me. Curses!), you find your suspension of disbelief start to kick in.

As a fan of the Rocky franchise, I really liked this film. If you’re altogether new to the Rocky series and all you want to see is Rocky beating on guys for an hour and a half, you’ll be disappointed. However, if you’re more interested in Rocky as a character rather than just a boxer, then you’ll appreciate this movie for what it is and you’ll love Stallone’s performance. Out of the six Rocky movies, I’d actually rank this as my third favorite (with the original taking first place and Rocky IV taking second).