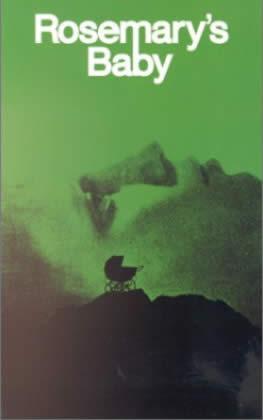 A very influential horror/suspense film of its day, Rosemary’s Baby is a pretty entertaining film if you’re willing to have the patience to watch it. Rosemary’s Baby is a very slowly paced movie, taking a full 2 hours to build-up to the finale. It’s a bit like a puzzle, with all the pieces given to you at the right time, but not coming together until the end. And done well, might I add.

Guy and Rosemary (Mia Farrow) Woodhouse have just moved into a gorgeous new apartment in New York City. The happy couple plan on starting fresh and raising a family. They soon meet their new neighbors, the elderly Castevet couple, who are very nice but excruciatingly nosey. Guy quickly befriends the Castevets, much to Rosemary’s chagrin, and immediately meets new success in his stuggling acting carrer (though it is success at the expense of his competition). Guy then wants to have a baby, much to Rosemary’s delight. However, Guy has Rosemary go to a doctor recommended by the Castevets who gives her some unorthodox advice. Rosemary begins to feel uneasy, as she can tell there is something wrong with the baby. Rosemary investigates the Castevets and uncovers a terrible secret.

Rosemary’s Baby, her actual baby, does not show up until the very end of the film; the last 15 minutes. And, as you’ve probably heard, you do not get to actually see the baby-itself. Some complain about this, as they find it weakens the ending, but personally, I think the less-is-more approach is appropriate. Can you imagine how goofy this movie would have been had they shown some cruddy, rubber demon puppet at the end? It would have completely killed the film. The exact same thing happened to the original Thing from Another World, where they showed the mysterious monster at the climax and it looked like a pro-wrestler in a Frankenstein costume.

The 2 hours leading up to the birth of the baby is more like a suspense-thriller film than a horror movie, requiring a certain level of patience and attention from the audience. The only real moment of “horror” during the film is the rape-sequence. It’s the most frightening/disturbing portion of the film, as Rosemary is drugged and hallucinates that she is being raped by a strange beast: the Devil. It’s a very shocking, surreal moment, as she mixes reality with a bizarre nightmare while being throttled by this hairy monster.

Rosemary’s Baby is, well, kind of boring. Its old fashioned filmmaking for certain, which isn’t exactly a bad thing, but it does stretch things out a fair bit too long. After you’ve seen it once you’ll feel proud that you’ve finally watched it, but you’ll most likely never want to see it again. Rosemary’s Baby is a good, old fashioned suspense movie, but not something you’d watch during a night with friends or a horror movie marathon.