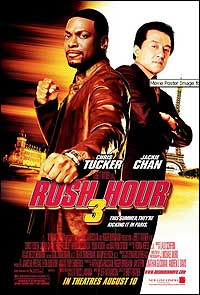 The Summer movie season has finally started to fizzle out with the release of this terribly generic and terribly unnecessary sequel, “Rush Hour 3”. Jeff Nathanson pens a very boring, predictable and dirivitive script with the entertainment-value even further eroded by Brett Ratner’s uninspired directing. The characters are empty and lifeless, the majority of the acting is subpar even for a run-of-the-mill action film such as this and all the surprises are telegraphed to the audience with all the subtlety of Chris Tucker’s voice.

Los Angelas Detectives Carter (Chris Tucker) and Lee (Jackie Chan) are back in action, as the Chinese crime syndicate known as the Triads have placed death marks on the French ambassador, the Chinese ambassador and his daughter. Carter and Lee head to Paris to keep the ambassadors safe, all the while trying to keep their own skins intact along the way. It seems the only means to stop the Triads is to uncover the secret of their mysterious leader, but standing in their way is Lee’s younger brother, Kenji (Hiroyuki Sanada), who has turned to a life of crime.

What makes “Rush Hour 3” especially dreadful to watch is the fact that it’s just so boring. Explosions, gunplay and a shrieking ethnic stereotype may keep the ADD kids entertained, but those of us looking for a story of even marginal uniqueness are going to be sorely disappointed. I’m well-aware that these sorts of “popcorn flicks” require one to shut their brain off upon setting foot in the theater, and I usually give these films that kind of handicap, but “Rush Hour 3” manages to transcend even the mundane nature of the most average of popcorn flicks and redefines the word “lame”. With writing, acting and direction this shallow, the only thing that will keep you awake is the shrill sound of Chris Tucker’s voice.

I suppose even films as generic as “Rush Hour 3” have their upsides. Jackie Chan’s brand of improve martial arts action is pretty much the only reason I bothered catching this flick (well, it sure wasn’t for Chris Tucker’s tired “angry black man” brand of comedy) and I left reasonably satisfied with his efforts. Chan’s frantic, cartoonish fight sequences are pretty much the only thing that will hold your interest, so all you Chan fans who can brave the horrors of Chris Tucker should enjoy what you see.

There’s only so much I can say about “Rush Hour 3”. It’s so incredibly hackneyed and overdone that it leaves you with very little to talk about. I didn’t leave the theater pumped-up or excited, I left feeling like I needed a nap. In retrospect, I should’ve just slept through the movie.