Saw (2004) introduced audiences to a fresher form of horror which amalgamated the suspense of a Hitchcock movie with down and dirty visuals and the use of a drop of torture to create a compellingly successful horror movie. It was sadistically violent yet excused itself through the plot premise of a man, Jigsaw, who wanted to make sure that his victims would leave his death traps with a new appreciation for life. It was satisfactory for people who want a little bit more substance with their horror and definitely gratifying for those just wanting to see blood and guts. 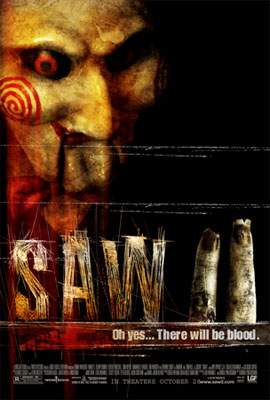 Saw II does not disappoint as it hitches on to where the previous film left off. The Jigsaw killer (Tobin Bell) is at it again, leaving conceited victims in escapable death traps to give them a taste of death in order that they may fight (and appreciate) their lives. This time, he has Detective Donnie Wahlberg’s son and Donnie is not a happy camper. Donnie finds Jigsaw and is freaking out the whole time as he watches his son on a computer, navigating haplessly through a house of horrors in an undisclosed location.

As before, we are introduced to a cadre of miscreants who have a bit more character to them than your run-of-the-mill horror movie kids who are expected to die. There is a reason why each character is chosen for Jigsaw’s experiment and each test of their longevity is crafted with them in mind. The movie takes a step forward from the previous Saw by actually revealing the Jigsaw character, his origins, his motives, and himself as a person. He is not as deliciously evil or complex as Hannibal Lecter but is definitely as tangible and memorable. And as before, there is a nice twist at the end that is not as shocking as the originally but still a catalyst for a Saw 3.

As with all horror movies, this is a film to be reserved for those who can take it and not for those of us who are faint of heart or don’t want that “I’m going to Hell” feeling after seeing it. For those that can see it, Saw II is appreciable in its own way and you’ll like yourself better afterwards. Jigsaw is pleased.