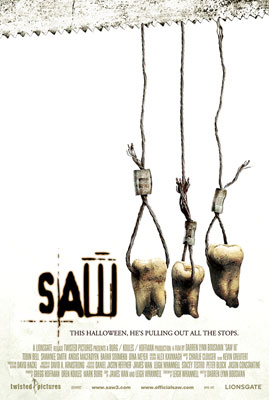 I love the concept of the Saw films. Not just the whole “sadistic torture with a life lesson” thing, because that’s great too. No, I’m talking about the recent tradition of releasing a new one each year around Halloween time. It takes me back to the days when Paramount would release a new Friday the 13th film every year, and other studios with slasher franchises would follow suit. Sure, people complained that the story quality would decline with each film, but you don’t go to a slasher film expecting high art; you go for the blood and gore. Likewise, the Saw films deliver everything their premise promises. And, thankfully, the Saw franchsie has remained consistently good for three movies straight.

The serial killer, Jigsaw, and his protégé, Amanda, are continuing their quest to teach ungrateful human beings to appreciate their lives. However, Jigsaw’s brain tumor has taken a turn for the worse, giving him only days left to live, or even less. Amanda kidnaps a surgeon and attaches a deadly collar to her neck. The surgeon’s game is simple: keep Jigsaw alive until the end of one of his latest tests which is going on simultaneously. If she can accomplish this, she will leave with her life. Meanwhile, a man whose life was ruined after the death of his son is put through a battery of challenges, each relating to his own personal desires for vengeance. However, nothing is ever quite as it seems with Jigsaw.

The Saw films all flow together beautifully, with this installment shedding quite a bit of light on the background of the first and second films. A good portion of the film is spent focusing on Amanda’s history and how she came to consider jigsaw her mentor. It’s a welcomed bit of depth, as it works to clear up any “WTF” questions people might have left over from the previous installment.

The traps in this movie are just as brutal, ingenius and torturous as in any of the prior films. Saw III also lays on the gore much thicker than the other installments, getting away with a lot of nasty effects most R-rated films shy away from. The deaths in this movie are quite ugly, with lots of broken bones and self-inflicted wounds of the worst kind.

I only have a few qualms with this installment. Firstly, the screen time devoted to the man going through his challenges and the surgeon taking care of Jigsaw is rather unbalanced. At points in the movie, they spend so much time solely on the surgeon’s story you almost forget there’s a guy out there being horrifically tortured. The twist at the end (don’t worry, I won’t spoil it for you) also felt like a bit of a let-down after the shocker from Saw II, or even the one from the first film. It felt a bit too cut and dry, as I was able to predict it after a certain point in the film, where-as the twists from the last two films took me completely off-guard.

Saw III lives up to its expectations and is on par with the previous films. It’s probably my least favorite of the series, but by no means is it bad. It’ll still make you cringe and possibly turn your stomach with some of the depraved violence captured on film.