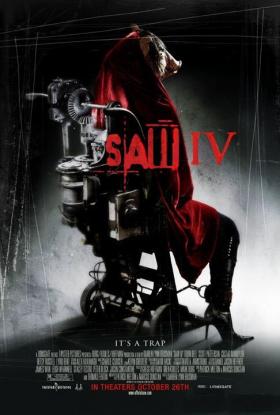 Another Halloween, another “Saw” flick and I couldn’t be happier. Four movies later and I’m still loving the franchise and hoping this tradition continues onward into the foreseeable future. I actually found this installment to be an improvement over the last, both in regards to the story, the pacing and the mandatory twist ending. This surprised me, as I was actually expecting the “Saw” franchise to gradually decrease in quality with each new addition. Such is not the case with “Saw IV”.

Jigsaw (Tobin Bell) may be dead but his gory legacy lives on. Detective Rigg (Lyriq Bent) believes that there was a third accomplice helping Jigsaw and Amanda perform their ghastly tortures and his obsession lands him right in one of Jigsaw’s morbid morality tests. Rigg has a limited amount of time to follow Jigsaw’s clues, test his own limits and perform grotesque acts if he wants to save the life of his friends. Meanwhile, two FBI agents are hot on Rigg’s trail, putting together clues and gaining insight on the origin of Jigsaw.

My primary beef with “Saw III” had to do with the pacing, which I thought was uneven. This problem has been solved for “Saw IV”, thankfully, as the movie spreads out the screentime between Rigg’s and the Agents’ stories without the film feeling lopsided. In regards to the story, I thought the way they worked in Jigsaw’s rather tragic origin was fairly well done. It certainly supplemented Rigg’s ordeal nicely and remained just as exciting and interesting as the other ongoing plotlines. As for Rigg’s torture, they managed to do something different with this sequel. Instead of having the lead victim trapped in some subterranean hellhole, Rigg is free to traverse the city with his major dilemma being a time limit preventing him from seeking outside assistance. This was a fresh spin on the typical “Saw” formula, as even though Rigg is free to go where he chooses, he’s still squirming in one of Jigsaw’s traps.

I suppose if I had one major beef it would have to be with the ending, which is difficult to discuss in my review since I don’t want to spoil anything for you. While previous twists have been pretty clever (save for “Saw III’s”, which I found somewhat unexciting), this one was both clever and confusing. They “cheat” with the editing at the beginning of the film, leading you to believe something that isn’t entirely true just yet. While it makes for an interesting twist, it still feels like cheating. They also leave several questions unanswered leaving you with a lot of “why”s hanging out of your mouth. I’m sure they’ll be covered in next year’s installment, though.

Save for an ending that left me scratching my head far more than I wanted to, this has been yet another satisfying episode of “Saw”. By now you either like the series or you don’t. If you haven’t enjoyed one through three then there’s no reason for you to waste your time here. But if you’re one of those who do dig these flicks, then you shouldn’t be disappointed this year.