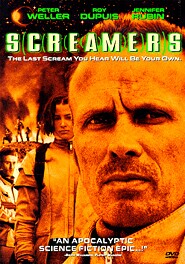 When I was but a lad in 1995, when I saw the ads for Screamers I immediately thought it was a sequel to Tremors, going by no other evidence then there being monsters that travel underground and the titles rhymed. How wrong I was. Screamers is, in fact, a science fiction film about evil robots that want to kill-off humanity…just because.

In the distant future, mankind has colonized far away planets, but in the process, split into two factions: the Alliance and the NEB. The factions are currently at war over the mining rights to an energy-rich substance. On the planet Sirius 6B, the Alliance created a ruthless Autonomous Mobile Sword, AKA a “Screamer”. The Screamers travel through the ground, killing ANY living thing in their path, including Alliance soldiers (HA!). Much to the chagrin of the Alliance, the Screamers have evolved and begun upgrading themselves. At a base on Sirius, Alliance Commander Hendrikson (Peter Weller) is extended an offer by the NEB for peace. Hendrikson takes along a bumbling stooge to travel to the enemy base to negotiate peace, but along the way they encounter the new and improved Screamers, and they’re not what the Alliance is expecting.

Screamers is sort of a “just like Terminator and Aliens only not as good”-movie. Yet, despite the blatant similarities between the films, Screamers has more than enough original material to stand on its own. And hey, it’s great seeing Peter “Robocop” Weller getting work.

The big plot point of the film is that the Screamers can take on the appearance of human beings, which turns this into a quasi-“homage” to John Carpenter’s the Thing (or a rip-off, your decision). There aren’t really enough characters in the movie for you to make any wrong guesses as to who is evil and who isn’t, which is a shame, as it sort of kills the mystery-angle they’re going for. The Type 1 Screamers are my favorite of the bunch, though they look like robo-chameleons with a buzzsaw embedded in their skull.

The special effects are, well, very “1995”. This was that transitioning period between “traditional” effects and CGI. As a result…neither are very good. There are some cheesy stop-motion moments, like the aforementioned Killer Chameleon. And, no matter how much I love stop-motion, even I can admit that it looks pretty silly. There’s also an awful CGI spaceship at the very end created with Myst-quality computer imagery. And then there’s some awful bluescreen moments that’ll make you cringe.

Looking back at my review, I’m really ripping this movie apart like it’s the worst piece of cinema 1995 had to offer, but it really isn’t that bad. Though a little dry on the creativity, the plot holds itself together and there are many classic moments. The Screamers-themselves are pretty cool; kind’ve like Cyborg Graboids (I just came up with the plot of Tremors 5! Someone call the Sci-Fi Channel!).

Screamers is a fun time-waster; a popcorn flick from start to finish. An okay rental or definitely something to watch when it’s on TV. I wouldn’t buy the thing, though. And *I* own a copy of Troll 2.