Serenity is for Nerds 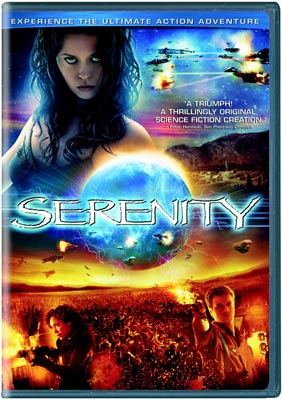 Serenity is described as a “sci-fi western.” At one point I may have been able to know what this meant, but every deep space sci-fi epic in the last ten years has had that label and now it doesn’t mean squat. Look at Star Wars: isn’t Han Solo essentially a space cowboy? Or Lonestar from Spaceballs? Anyway, perhaps what they mean to say is that it is essentially the western genre upgraded to the wonderful world of special effects and epic space battles. I guess that is a fair assessment to make. But such a classification does not a good movie make.

Serenity is the typical nerd tale of a galactic space government that has achieved peace throughout the galaxy, so immediately you know that something is wrong. Apparently, there’s something horrible about what lies outside of the peaceful planets including cannibals and pirates and what not. Han Solo-wannabe Mal (Nathan Fillion) takes onboard his ship the weird psychic girl River (Summer Glau) and, together with his crew, they go to the fringes of the galaxy to have adventures and stuff.

Ok, that’s oversimplifying it. But if I go any further, I’ll start to scare people off.

The special effects are top notch but really nothing more than what you would expect to see from a TV episode or a made for TV movie. Think Star Trek: The Special Edition. The plot is laughable as one big cliché, predictable to most sci-fi fans and offering nothing new. What makes the movie and Whedon so popular is the dialogue. It is clever but by no means brilliant, poking fun at what is happening at the moment and incorporating a lot of modern idioms despite its futuristic setting (“Dear Buddha, please bring me a pony and a little plastic rocket”).

All jokes aside, Serenity is Star Trek Lite, lacking memorable characters and fancy terminology that could possibly put it on a pedestal for nerdhood. It is, however, a well made movie and delivers what it promises, though I still wouldn’t trade it in for my Millenium Falcon.