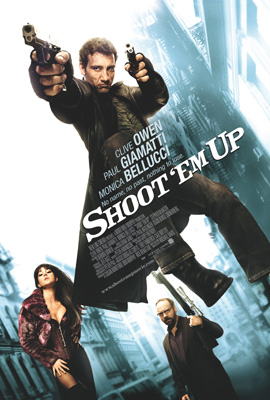 You know what the difference between films like “Shoot ‘em Up” and “War” is? “Shoot ‘em Up” is a good bad movie, while “War” is just a plain ole bad movie. To elaborate, while films such as “War” sincerely believe they are God’s gift to the action genre and legitimately artistic and inspiring pieces of celluloid, “Shoot ‘em Up” is completely self-aware that it’s an over-the-top, leave-your-brain-at-the-door bulletfest and only aspires to have a good time and never takes itself more seriously than it ought to. And that’s why I can in good conscience give a thumbs down to stupid cliché-ridden films like “War” while simultaneously enjoying goofy brainless films like “Shoot ‘em Up”.

Smith (Clive Owen) is just your average Brit living in America with a chip on his shoulder and carrot-fueled super eyesight. He inadvertently becomes the protector of a newborn infant who has become the target of the pudgy hitman Hertz (Paul Giamatti) and his legion of dispensable cannon-fodder assassins. Smith’s only ally in this crazy ordeal is a Eurotrash hooker named Donna (Monica Bellucci), whom he needs to feed the baby breast milk while he deals with all the psychos out to get them.

As previously stated, “Shoot ‘em Up” is entirely self-aware that it is insane and ridiculous and not a movie to be taken seriously for a split second. So as such, it ignores the requirements of physics or character depth or coherent plotting all for the sake of having some fun at whatever the cost. The action scenes in this movie are intentionally as crazy and impossible as you can imagine, but they all have a sense of humor to them so you know you should be smiling instead of sneering. If you can get past the fact that the physics are complete nonsense, you shouldn’t have any trouble going along for the ride.

And that’s what makes “Shoot ‘em Up” a fun movie. The gun battles are completely outrageous and will have the audience laughing and cheering at the preposterous “improve” on the part of Smith and the ludicrous situations going on around him. I also enjoyed the film’s soundtrack, featuring the likes of Motorhead, Motley Crue and AC/DC, but I’m a sucker for oldie metal.

While the fight scenes are fun, the characters aren’t all winners. Clive Owen is hilarious as Smith, with his constant carrot-chewing and hair-trigger temper winning the audience over mighty quick. His one-liners weren’t all gold, but I think they were supposed to be intentionally cheesy and stupid at times. Paul Giamatti managed a particularly memorable villain, who never seems all that threatening, but then that’s kind of the point. Like everything else in the movie, the villain has a sense of humor about him which makes him almost as likable as the hero. Now, outside of fun character quirks and inspired casting, the main characters don’t come across particularly deep. They try to throw in a thin and watery backstory for Smith, but it seems more like an afterthought than anything necessary for the character, and in all honesty, they pretty much ripped it from “The Punisher”, anyway.

“Shoot ‘em Up” is a fun little goofball movie, and when I look at my to-see list for this month, well, it looks to be about the best action flick that’ll be out for the next four weeks. Anyhow, if you can lighten up, then I’m sure you’ll enjoy “Shoot ‘em Up”.