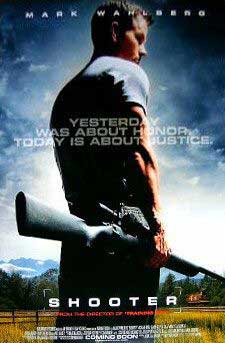 Antoine Fuqua’s “Shooter” exists primarily to fill the year’s quota of generic, derivative action-thrillers. A text book “popcorn movie” from start to finish, the audience will likely fill their bellies on the smorgasbord of explosions, but the wafer-thin plot will leave them with an empty feeling inside. Then again, that’s exactly what a popcorn movie is supposed to do.

Bob Lee Swagger (Mark Wahlberg) was the best sniper the government had. But when a mission in Ethiopia went wrong and his partner was killed, Swagger decided to hang up his rifle for good and file himself away in the mountains. Three years later, Colonel Isaac Johnson (Danny Glover) tracks him down to extend a request from the government. They believe that there’s going to be an attempt on the President’s life by a highly-skilled sniper and only an equally skilled sniper can help them prevent the tragedy. Swagger reluctantly offers his services, but on the day of the suspected assassination, Johnson turns on him and Swagger finds himself framed for a murder he didn’t commit. On the run, Swagger seeks to mete out justice to those responsible for his predicament.

So yes, “Shooter” would have just been better titled “Every Action Movie Ever Made”. I believe Director Antoine Fuqua just had a checklist of action movie clichés and gradually marked them off one at a time during the filming process. My first instinct was to say that this movie was similar to “Commando”, only with a cookie-cutter conspiracy plot tacked on and no ‘roid-raging maniac picking up a phone booth and hurling at the enemy. Said conspiracy plot is so hackneyed it could make Michael Bay blush, offering nothing deeper than “there are people in the Government framing innocents and doing STUFF!” Not especially thought-provoking.

The action is likely what you’ll be seeing the film for, and I’ll say, it has its ups and downs. Being a movie about snipers, most of the action elements are going to be guys sitting at vantage points, shooting the enemy. That can be fun and is usually coupled with some Metal Gear Solid-style stealth missions. In all honesty, most of the action sequences made me feel like I was sitting in my living room playing my PS2. The action is serviceable but nothing ground-breaking.

If “Shooter” had one saving grace, I suppose it would be the cast. Wahlberg isn’t especially great as the main hero, but he does alright. Well, except for that scene where Johnson asks him if he’s in and Wahlberg responds by donning a pair of sunglasses, smirking at Johnson and then walking toward the camera in slow motion. South Park is going to have a field day with that bullshit.

Danny Glover plays the lead villain and delivers his usual performance, which is fine, ‘cause I like him. However, I dunno if he did it on purpose or if my head just isn’t screwed on quite right, but he had a real bad lisp going on throughout the movie. Michael Pena plays rogue FBI agent Nick Memphis who gets in to deep and is forced to team-up with Wahlberg to save the day. The character was supposed to be rather whiney and green, so to that end Pena did a fine job. Something which surprised me and likely no one else was Elias Koteas as a scummy agent/rapist working for the bad guys. It was a little jarring seeing Casey Jones from the original “Teenage Mutant Ninja Turtles” movies playing such an evil dude, but entertaining at the same time.

“Shooter” is what it is: an utterly run-of-the-mill action film which has little to nothing original to offer the audience. I’d recommend checking it out if you’re bored or something, but don’t invest too much money in the thing and certainly don’t be angry if you didn’t like the flick. I mean, you have been warned, after all.