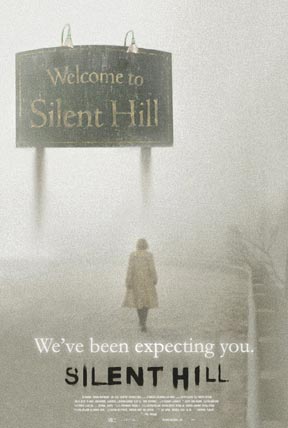 Christophe Gans’ last film, Le Pacte des Loups (The Brotherhood of the Wolf), is a pretty good indicator of what to expect out of his most recent film, Silent Hill. The aforementioned film was shot with a persistent atmosphere and mood that was incredibly rainy, dreary, and starkly despondent. His preference for setting over acting and dialogue will probably be his most enduring quality as a filmmaker as well as his downfall: The Brotherhood of the Wolf is an amazing journey into a fictional historic time of France but it suffers from a weak script and uses an overly typical conspiracy theory to substitute for a plot. In the same vein, Silent Hill reawakens some of these weaknesses but also manages to overcome the remaining few.

Silent Hill is based off the video game of the same title. The general plot of the game involves people who find themselves in the deserted ghost town of Silent Hill, which turns out to be a pseudo-Purgatory on Earth. What you encounter in Silent Hill is a manifestation of your own guilt, taking the form of horrific and hellish monsters out to punish you for your sins (which is why the children in the game don’t seem to notice anything wrong other than that there’s no people in the town). The first game, however, established the reasons as to why the town is like that. It probes the history of Silent Hill for answers. Taking mostly from the first game as source material and picking elements from the other games that could help, Christophe Gans has created the best video game film adaptation of all time as well as a solid movie in its own right.

Rose Da Silva (Radha Mitchell) and her husband (Sean Bean) adopted their daughter, Sharon (Jodelle Ferland) nine years ago. Sharon sleepwalks and speaks of a town called Silent Hill. Concerned with her daughter’s health, Rose decides to take Sharon to Silent Hill even after doing research on the town and finding out about its bizarre history (the town was abandoned in the 70’s due to a coal fire which, supposedly, still burns beneath the surface). An accident on the road leads to Sharon’s disappearance and Rose has to enter the town to find her… as well as a crapload of hellish creatures out for her as well.

The plot follows true to the game and does not rely on prior gaming experience to understand. In fact, it triumphs over its predecessor in that it better explains Sharon’s bizarre history and the question of why Silent Hill is a perpetual Hell on Earth. Some people have complained that the ending monologue is unnecessary and contrived: I’d say that without it, you’d have a bunch of pissed-off mainstream audiences demanding an explanation. There are a handful of illogical plotholes that don’t seem to make any sense, such as why a character would set clues for Rose to follow instead of telling her directly… or why your daughter would just leave you in the car and go off into Creepy Town by herself… or why didn’t they tell us the story behind the guy with a big pyramid on his head who swings a ginormous sword? Then there are the effects. Good gravy, this movie would have been infinitely better if Gans left his actors alone instead of enhancing them with CG bells and whistles. There were moments in the film where I was mentally editting the scene to imagine how it would be without the effects and trust me, it could have been crap-your-pants-a-rific. You don’t need CG demon bugs AND a big dude with a sword five times his size in order to make a scene scary: just keep the guy with the sword. Stuff like that. And the acting? Definitely could have been better. The dialogue is stinted at times, such as when a bunch of people get hacked to death and Rose says “it’s going to be okay” with a straight face. Come on lady, you’re supposed to be saying that while sobbing uncontrollably and shaking in your boots. When this comes out on DVD, I’ll watch the French dub just so that the acting won’t interfere with my enjoyment.

For everything else, the movie does beautifully. The setting is the most thought-out part of the film: it’s truly a creepy environment filled with realistic fog, abandoned buildings, decaying corridors, and ash falling from the sky. The sound is incredible: when the first siren goes off that tells you that bad stuff is about to happen, it’s done in complete darkness and your hair starts to stand up. The music in the film (and the awesome closing song played during the credits) come directly from the game soundtracked composed by Akira Yamaoka. The plot, as I said, does make sense but may require a bit of explaining for those who don’t understand the whole “make-a-deal-with-the-Devil-to-punish-those-people-who-tried-to-burn-me” thing. The film stays consistent from start to finish with a little bit of sluggishness in the middle, but that’s just due to the pseudo-crappy dialogue that gives us a rest from all the demons and weird stuff.

Though I had my reservations grade-wise upon leaving the theater, my mind seems to have diluted it in a way that makes the essence of this film definitely enjoyable as a horror movie, a fantasy, and a faithful adaptation all rolled into one. I know for sure that I’ll be visiting Silent Hill again soon and I hope that others will as well.

Acting: C+
Aesthetics & Entertainment: B+
Storyline: A
Recommendability: B

Silent Hill is a success on a number of levels. First, it is a fantastic adaptation of the original video games and easily ranks as one of the best video game-based movies ever made. Second, it is one of the extremely rare movies which takes concepts by author H.P. Lovecraft and translates them to the screen accurately. And third and finally, it is just a damn-good horror movie.

As the story goes, Rose’s adopted daughter, Sharon, keeps speaking of a place called Silent Hill in her dreams. Curious as to what that means, Rose takes Sharon up to the abandoned West Virginia ghost town to see if they can find anything significant. On the way there they have a car accident. When Rose awakens, Sharon is nowhere to be found and there appears to be no way out of the creepy town of Silent Hill. What comes next is a bizarre, surreal, disturbing trip through the town’s grotesque and indescribable horrors, as Rose searches for her lost daughter.

The first 2/3 of the movie are a magnificent treat for the senses and frighteningly faithful to the source-material. The audience is instantly flung into the insane and horrifying world of Silent Hill, where legions of twisted monsters lurk in the dark and reality is completely optional.

The effects of the movie are brilliant, bringing the nerve-wracking surreal world to life. Entire rooms and environments flake-away like ash and the hideous creatures with impossible anatomies are rendered fantastically.

And the monsters are incredible. You’ve got flaming dead babies, acid-bleeding mutilated zombies, hordes of man-faced leeches and, the best of them all, Pyramid-Head.

The down-side is the last 1/3 of the film. It seems the director got so involved scaring the crap out of us he forgot that the audience might appreciate an explanation as to why Silent Hill is so screwed up. What follows is a painfully long exposition from one of the characters that spells everything out in detail for the audience. This yammering monologue could’ve been avoided, or at least had its length cut short, had the director dropped a few more clues through-out the movie or at least given us our explanations in distributed portions.

Also, I felt my favorite “character” in the movie, Pyramid-Head, could’ve used a lot more screen-time. He was just that cool.

Although the ending falls flat to an extent, it isn’t nearly enough to ruin the rest of the film. I’d easily give it a solid B. Were it not for that last 1/3, this might have been the perfect horror movie. As it stands, it comes pretty close.

I know, no “Relative Grading Scale” this week. I’m just not in the mood. So, instead, just sing-along with me. “Silent Hill! Silent Hill! Utai o utauuuuu! Mina de! Mina de! Utaimashouuuuuu!!!”