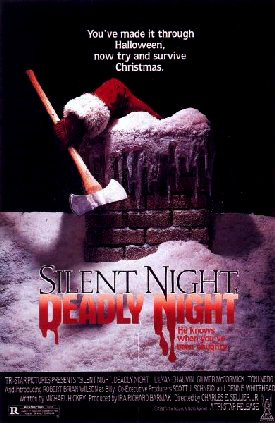 At a tender young age, Billy went to a mental hospital on Christmas Eve to visit his comatose Grandfather. When nobody was looking, ole Grandpa woke up and told Billy a frightening story about how Santa would punish naughty children on Christmas. On the way back from the mental institute, a criminal in a Santa Claus outfit forces Billy’s family to stop their car. “Santa” then proceeds to murder Billy’s Father, rape his Mother and then slit her throat. Billy and his little brother are then sent to live in an orphanage run by an abusive nun, Mother Superior, who punishes Billy quite severely for not respecting Santa on Christmas Eve. Fast forward 10 years, Billy is now 18 years old and quite the athlete. He gets a job at a toy store, but much against his will, is forced to dress up as Santa to please the children. During the Christmas Eve party, Billy (still in his Santa outfit) gets royally drunk. He sees the girl he has a crush on getting raped by his jackass co-worker and, *finally*, Billy snaps. Grabbing an axe, Billy sets out to punish all the naughty boys and girls in town.

This film was incredibly controversial when it was first released back in 1984. Parents considered Christmas to be “sacred” and that the idea of a person going around murdering people in a Santa Claus outfit was just unthinkable. Parents Groups picketed movie theaters and critics smashed the film for its “evil” nature. Looking back at it now, it seems kind of silly. I mean, the “Killer Santa” bit had already been done in the 1972 film, “Tales from the Crypt”. Additionally, this movie was rated R; kids shouldn’t have been seeing it, anyway.

Controversy aside, Silent Night, Deadly Night is a bit of a run-of-the-mill slasher flick. The background on Billy is quite good, setting up his killing spree nicely. They manage to work in all the details necessary, such as Billy’s reinforced concept of “punishment”, his fear of Santa and his notion that the jolly fat man murders people. The kills, by and large, aren’t very impressive. Slashed throats, bodies thrown through windows, stabbings, axe-blows…that sorta thing. The best kills in the movie are the more “holiday-oriented” ones. I’m particularly fond of the scene where Billy strangles a guy with Christmas lights and the part where he impales a topless girl on the horns of a reindeer. Aside from those, though, the kills aren’t very innovative.

The atmosphere is done rather well, with the camera often focusing on some of the creepier aspects of the holiday season. The camera pans over those ugly nutcrackers as people scream bloody murder, or the use of lots of creepy imagery of a frighteningly jolly Santa Claus. Probably the best use of atmosphere is the part with the two sledding teenagers; when the sled rolls down to the bottom of the hill carrying its “cargo”. Great scene.

The original Silent Night, Deadly Night is a great horror film for the holiday season, but that’s about it. Aside from a few good kills and a memorable scene here and there, it’s just rather bland. Still, I get in the mood to see it once every year, so that says something for its re-watch value. I give it a C. Average but memorable.