The Skeleton Key Opens a Box of Feces

America has yet to fully grasp the horror movie genre with the same artistic precision that the Japanese have managed to. Horror can usually be classified into four subgenres: suspense, slasher, thriller, and horror. Well ok, I made that up, but it works. The latter of the four is perhaps the most difficult subgenre to tackle as it relies on disseminating fear into its most primitive components. What one would try to achieve through a creaky door (suspense), a relentless killer (slashers), or a game of cat-and-mouse (thrillers) must now be accomplished in the most sublime way possible, such as a black and white video that plays random yet disturbing images. 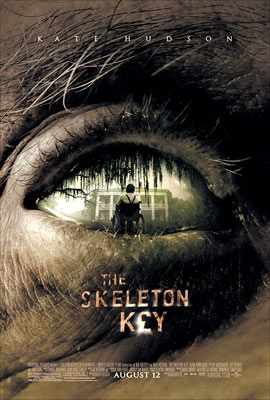 What does this have to do with The Skeleton Key? Not much. I just like to talk.

The Skeleton Key’s plot involves a young woman (Kate Hudson) who accepts a job as a personal hospice nurse to an old guy in a creepy-looking plantation house out in the Louisiana swamps. Oh yeah, there’s also the old guy’s wife who is quite rude and tells her the rules of the house (such as no mirrors and not to go upstairs). Already we are treated to the lack of common sense that permeates the movie at every possible turn. Why would an ex-care provider, sick of seeing the commonalilty of death around her, want to pick a job that involves dealing with a dying old man? Especially in a creepy mansion in a swamp in the middle of nowhere with Kathy Bates’ twin sister? You would think that a care provider would have the academic knowledge to sense danger at first glance, but then again this movie would probably never happened had that been the case.

Anyway, things spiral out of control as we figure out that the house has some hoodoo history (no, that is the word they use and not “voodoo”) and that Peter Sarsgaard (Flightplan) is an asshole in this movie too. The movie does have an impressive landscape to work with that gives the viewer the antiquated, haunted vibe of a backwoods plantation and the homeliness of Bourbon Street. But the environments that Hudson maneuvers through are limited to those two realms and the movie eventually slides into tedious back-and-forth that is not helped by the plot. The ending is … well, a worthwhile attempt at a twist ending that is dark humor at its best (see Denzel Washington’s Fallen for a better idea) but is lame at its worst.

The Skeleton Key: better than The Ring 2, but that’s not saying much.