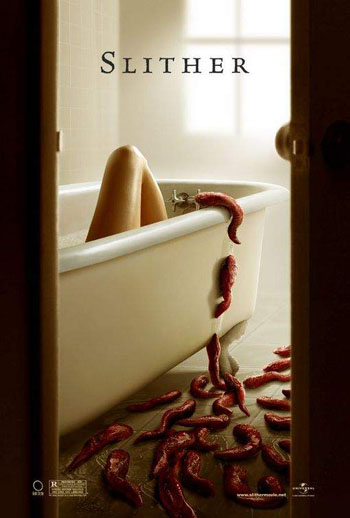 Raise your hand if you’ve seen Night of the Creeps. Now, I can’t actually see you, but I’m going to assume that the majority of the people reading this have never heard of Night of the Creeps, much less seen it. But for the record, Slither is basically a remake of that movie. And you know something? It does my heart good to see Hollywood remaking a movie that actually NEEDS it. Sorry, Tom Atkins.

Slither’s premise can be summed up in a single sentence: “Alien slugs invade a small mid-western town and start infesting the inhabitants and turning them into zombies.” Sure, there’s some other stuff, like the hive-mind of the alien slugs falling in love with some school teacher, that dreamy Captain Mal-guy from Serenity playing the male lead, and a chick birthing all the baby slugs by being crammed full of raw meat until she inflates like a blimp. But I said “in a single sentence”.

Slither is, unashamedly, a horror-comedy. And that’s what makes this movie so much fun. Unlike Night of the Creeps, which actually thought it was a serious, good movie, Slither is fully aware that it is ridiculous and just has tons of fun with the premise. They even include a clip of the Troma classic, The Toxic Avenger, on a TV screen as if to remind the audience not to take anything too seriously.

Now, it should go without saying, but this is a dark comedy. A VERY dark comedy. It has a lot of fun with violence and gore of the most offensive variety, so I suppose the overly-sensitive or weak-stomached individuals out there should avoid this movie on that merit alone. But this movie is targeting horror fans, so it knows what audience to play towards.

And the gore in this movie is outrageous. There’s the previously mentioned chick who gets crammed with so much raw meat she inflates to the size of an ice cream truck, an amorphous blob forged from human corpses, a gigantic squid-like monstrosity lurking in the forest, slugs in the mouth, slugs in the bath tub, slugs in eight year-old girls, and pretty much anywhere you can think of.

This isn’t a revolutionary horror movie, and it isn’t the most memorable one, either. Hell, I wouldn’t even recommend buying the DVD. However, it’s still a lot of fun, and with teeny-bopper garbage like Stay Alive being the only other options in the theaters at the moment, I’d recommend this to any horror fan in a heart-beat.

So on “The Relative Grading Scale of Remakes of Tom Atkins-Movies”, a BAD movie would rank as “The Fog”, but this was a pretty GOOD movie, so it ranks as an…um…”Night of the Creeps”? Man, I should’ve chosen a scale with more options.