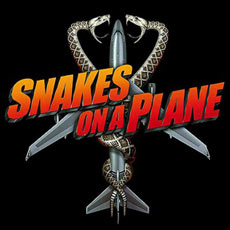 If it weren’t for the internet I doubt I ever would have even seen this movie. But, thanks to the glorious internet sensation and tremendous word-of-mouth doing all the advertising for it, Snakes on a Plane turned into one of the more anticipated and high-profile films of Summer 2006. Oh yeah, and Samuel L. Jackson!

A surfer-dude in Hawaii named Sean accidentally lands in the wrong place at the wrong time, witnessing mobster Eddy Kim murder a judge. FBI agent Nelville Flynn (Samuel L. Jackson) escorts him via commercial airliner to California to testify against Kim and put the mobster behind bars. Kim isn’t in a hurry to let that happen and has a horde of venomous snakes from all over the planet secretly stashed onboard the plane. Shortly after the plane takes off, the snakes are set free and holy crap!

You know, it’s actually a pretty interesting story. Maybe not one that would normally warrant a 90-minute feature film (this is more along the lines of a Tales from the Crypt-esque, half-hour anthology TV horror material), though. The film is decidedly tongue-in-cheek most of the time. I mean, it’s called “Snakes on a Plane” for crying out loud. The characters are all pretty much 2-dimensional templates, though it’s done intentionally for humorous effect. You’ve got the ditzy Paris Hilton bimbo, the rapper thug-poser, the horny dope-smoking youths, the adorable children and Kenan Thompson. Samuel L. Jackson delivers his usual kick-ass performance, playing everything straight despite the film being absolutely absurd. Jackson is just fun to watch in any environment, honestly.

Then there are the snakes. The snakes, more often than not, are done in CGI. Bad CGI. I’m talking 1995, Sci-fi Channel Original Movie-quality CGI. It’s annoying, but I can’t say it’ll completely “take you out of the movie”, because the movie is extremely goofy to begin with. There are lots of real snakes and puppet snakes which are more enjoyable than the amateurish CG versions. Now, while the snakes don’t often look so great, the carnage they inflict on the passengers of the flight is magnificent. People getting bit in the Johnson by snakes, snakes eating pets, snakes constricting around people and a LOT of face-biting. It’s complete mayhem and a whole lot of fun to watch. The way the passengers try to protect themselves from the serpents is pretty clever, too, as they only have modern-day commercial airline supplies to work with (sporks!).

This is a goofy popcorn flick that you are absolutely *not* supposed to take seriously. Just relax and enjoy watching people get mauled to death by vipers. Also, if the crowd in your theater doesn’t clap and cheer when Samuel L. Jackson says the line…then you’re not watching it with the right crowd. Snakes on a Plane gets a C+. The damn CGI kept it from a B.