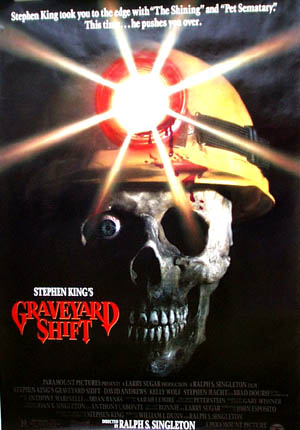 I was one of those kids in the early 90’s blessed by having access to not only HBO, but HBO2 and HBO3. In addition to that priviledge, my elementary school weekends were a thing of beauty, as I was given permission by my mother to stay up as late as I wanted watching TV on Friday and Saturday nights. And that’s how I became a horror fan; staying up as late as physically possible for a kid my age and watching whatever scary movie cable had to offer. Well, one I remember fondly was Graveyard Shift. I don’t know why, I just remember liking it. 15 years later, I’ve finally sat down to watch it again on DVD. Does that love withstand the test of time? Eh, to an extent.

At the Bachman Mill (tee hee @ in-jokes!1!), employees who work the graveyard shift in the mill’s dank, rat-infested basement all by themselves have been vanishing. The mill’s nasty-dispositioned foreman, Mr. Warwick, doesn’t seem to care. A health and safety inspector takes one look at the sub-basement and informs Warwick to have the cavernous, pitch black depths cleaned in a few weeks or else the mill will be shut down. Knowing something strange is going on in that creepy basement, Warwick assembles a clean-up crew of his least favorite employees to spend a graveyard shift down in the basement. Little do they know, they’re all about to be eaten by a giant bat.

Graveyard Shift is, yes, a “giant killer animal” movie. I know, the sound of that might give you nosebleed-inducing flashbacks of modern day Sci-Fi Channel Original Movies, but let me assure you, it’s no where near as atrocious as “The Snakehead Terror”. At the very least, the special effects and set design are quite respectable.

There are no actors of note to speak of, as the cast is culled entirely from a pot of nobodies. Yet, these nobodies aren’t half bad (well, some of em) and you’re rarely driven to the brink of insanity by any glaringly-bad acting. This is, through and through, a cheesy horror film.

Graveyard Shift’s only redeemable aspect is, of course, the giant bat-monster. You never know where it came from or how it got there (this is Stephen King we’re talking about, after all), all you need to know is that it eats people and lives in a cave. You’re given only glimpses of it through most of the movie, as is standard horror film protocol, but when you finally get a good look at it by the climax, you’re suitably impressed. The thing never flies, of course, since its 10 feet tall and crawling around a subterranean cavern that’s approximately 11 feet high, but it doesn’t need to. The way they dispose of the beast at the end brings back memories of “Stepfather III”, another horror flick I loved as a kid but would probably gag at, now.

Is Graveyard Shift a good horror movie? No, not really. Is it good at parties or a nice Halloween night rental? Yeah, definitely. It beats the Hell out of the giant killer animal flicks they’ve been pumping out these days, that’s for sure.