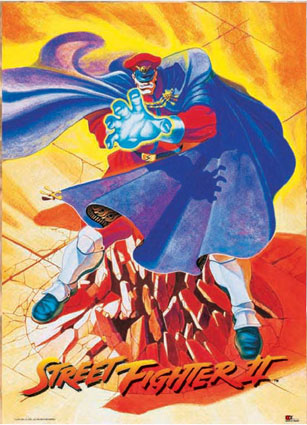 Street Fighter II the Animated Movie is a popcorn flick if there ever was one; only in cartoon-form. There isn’t much plot. It’s based on a fighting game, after all. And even though Street Fighter has probably the most plot of any 2D fighter ever made…that’s still not saying much.

Basically, M. Bison is the leader of Shadowlaw, a ruthless terrorist organization determined to rule the world. He’s gathering the best street-fighters from around the globe in order to build an unstoppable army. He has his sight’s set on the World Warrior, Ryu, but can’t seem to find the guy. So he gets the next best thing, instead: Ken Masters. There’s some stuff in there about Guile and Chun-Li trying to topple the Shadowlaw organization and what-not, but the main focus of the movie is really the relationship between Ken and Ryu.

“The Plot” is pretty much just a string of coincidences (and sequences that have nothing to do with anything) that serve to get two characters from the game to meet each other and throw down for no readily apparent reason. And Hell, it actually works.

The animation is beautiful and the fight choreography is top-notch. Everything moves at a manic pace and all the characters work-in their special moves so fluidly you almost have to watch the movie 2 or 3 times just to notice them all. Every character from the game, save for Akuma, gets at least a few seconds of screen time to show off their stuff. This might leave a few fans upset, as their favorite characters wind-up shoved into the background or are given only a few minutes of screen time (like Cammy). However, even if their appearances are short, they’re screen time is filled with them doing something awesome (Blanka was particularly hardcore).

The voice-acting from ADV should also be commended. You’ll recognize many of the voice actors, like Steve Blum, from ADV’s other productions, such as Cowboy Bebop and The Big-O. A few of the voice actors play multiple characters, but their talented-enough for you not to really notice it. At least on the first couple viewings. After a few more times you might notice that Dee Jay and Balrog are voiced by “that black dude who was in Halloween H20 for a few seconds”.

The music in the AMERICAN version is fantastic, too. The Japanese version, unfortunately, thought it would be a good idea to make the score sound like a ballet. It’s almost as if they decided to get the most inappropriate music they could find. The American version, thankfully, replaces the boring soundtrack with lots of rock and roll, which suits this kind of movie much better. Even if you’re one of those “OMG Undaground Muzack 4 lyfe!” snobs who doesn’t like any of the more mainstream artists chosen for the soundtrack, all the music chosen suits the scenes they’re applied to nicely. Particularly, in the best fight of the movie; Chun-Li vs. Vega. It transitions from a creepy slasher movie-inspired score, to a melodic French pop song, and then catches you off guard with a blast of KMFDM’s “Ultra”. It makes Vega’s entrance much more alarming.

Is Street Fighter II the Animated Movie a “good” movie? Well, by Joe Average’s standards, probably not. But to anybody whose been alive for the past 16 years and has played a Street Fighter game, you’re gonna love it.

It’s worthy of a B- at the very least. I personally love the movie, but I’ll agree, it’s a brainless popcorn flick that’ll only appeal to people who are fans of the games or the fighting game genre.