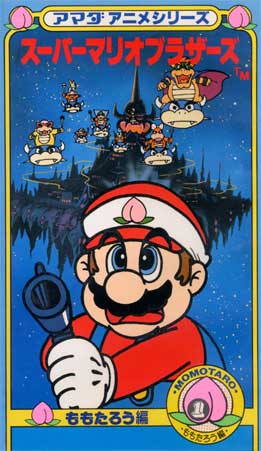 Following up on the previous Japanese-exclusive Super Mario OVA, “the Great Mission to Rescue Princess Peach”, Grouper Studios came out with a three-part series which took various Super Mario Bros. 3 characters and placed them within the confines of classic fairy tales. Unlike the last OVA, this one seemed to have noticeably lower production values, but on the bright side, the character models were far more refined and reflected their look in the games pretty accurately. As it stands, the “Amada Series” of Mario OVAs are just really, really boring.

The first tale called “Issunboshi” is basically a Japanese version of the story we Westerners recognize as “Tom Thumb”. A thumb-sized Mario is raised in seclusion by a kindly old couple until the day he grows up and sets off to the big city. Shortly after arriving he meets Princess Peach and the two hit it off. However, their joy is short-lived, as King Koopa quickly rears his ugly head and tries to kidnap the Princess. Mario manages to scare Koopa away by slicing off his horns with a sewing needle and out of gratitude Peach uses a magical mallet to grow Mario to full size.

The second tale is one that Westerners may be less familiar with, “Momotaro”. In this story, King Koopa and the Koopa Kids kidnap Princess Peach from her grandparents (played by Hammer Bros.) and whisk her back to their kingdom. The grandparents are distraught until a young boy named Momotaro (played by Mario) emerges from a fallen peach and swears to rescue their granddaughter. The couple gives Momotaro a shiney new gun and sends him on his way. He meets up with various enemies of Koopa during his journey (a Parabeetle, a Boomerang Bro and a Spike…all of which are Koopa’s underlings in the games) who vow to help him defeat their common foe. Mario and crew storm Koopa’s lair, defeat him and the Koopa Kids and save Peach.

The final installment is one we should all be very familiar with, “Snow White” (or as it is called in Japan, “Princess White as Snow”). In this telling, the evil Queen Koopa (King Koopa in drag, disturbingly) discovers that Peach is more beautiful than she is and chases her off. Peach goes to live with the seven dwarves (played by Toads) but is put under a magic sleeping spell when Koopa poisens her with an apple. Mario arrives and awakens Peach with a magic potion, leaving a frustrated Queen Koopa to kidnap her. Mario bursts into Koopa’s castle and defeats the Koopa Kids, but before he can rescue Peach, Queen Koopa takes her hostage with a knife. Then completely out of nowhere, Luigi drops down and kicks Queen Koopa in the face, saving the day.

As mentioned, the production values for these OVAs is really pretty low, resulting in a lot of still-frame montages, jerky animation and plenty of blatant corner-cutting. This overall lack of actual animation combined with the very sleepy and predictable stories makes for a very boring experience. Even if I were the intended age these OVAs were targeted at, I still doubt I’d enjoy them. People can say all the negative things they wish about the American Mario cartoons, but at the very least they were crazy and fast-paced enough to keep you from getting bored. And Hell, at least they employed more than six frames of animation per episode.

I suppose what makes these OVAs somewhat fun to watch is how absolutely whacky they are. I mean, Mario going all Rambo with a gun is a fun sight, but King Koopa in drag is definitely weirder. The stories are all told real straight-forward, so they don’t leave much room to have a whole lot of fun. As crazy as the casting of certain characters is, I feel some of them are kind of off. I mean, Mario’s friends in “Momotaro” could have easily been played by Luigi and a pair of Toads. Making them King Koopa’s soldiers was just…odd. The Koopa Kids are also terribly underused, appearing mostly as underlings with few lines to speak of.

These OVAs are very hard to find, so I felt rather disappointed once I saw them after years and years of hearing about them. Despite a few instances of crazy casting, the whole series lacks any semblance of imagination or wit, something the American Mario cartoons at the time had in abundance. I wouldn’t recommend spending any money on these, but if you can find them online (like I did), then give them a shot. And even then, only if you’re a hardcore Super Mario fanatic.