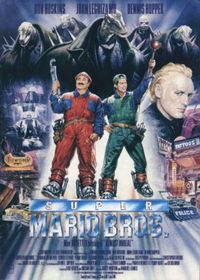 You wanna know something? I think this movie has an unfair reputation. Don’t get me wrong, as an adaptation of the classic Nintendo video game franchise, Super Mario Bros the Movie is a complete and utter failure. But that’s NOT how I like to look at it. Super Mario Bros the Movie is more an homage to the games from which it was inspired. If you can look at the movie with that perspective in mind, then it’s actually a whole lot of fun.

Mario and Luigi are the Mario Bros, your average every day Italian plumbers from Brooklyn. One day, however, Luigi spots a beautiful girl named Daisy being kidnapped by a pair of thugs. Mario (Bob Hoskins) and Luigi (John Leguizamo) race to her rescue through an underground plumbing system and, after warping through a dimensional rift, find themselves lost in the Mushroom Kingdom. The Mushroom Kingdom is a dreary cavernous place, ruled over by the villainous King Koopa (Dennis Hopper). Koopa needs a magical rock so he can transport his armies to Earth. However, the rock happens to be in the hands of the Mario Bros. Koopa puts a price on their heads and sends his legions of Goombas and Troopas after them. Only the Mario Bros can defeat King Koopa and rescue the Princess!

Like I said in the initial paragraph, this is NOT a full-on adaptation of the games. It’s closer to an homage, of sorts, jam-packed with references to characters, environments and aspects of the game. Spotting these various references is the most fun, if you’re a Mario fan.

Just about everything from the games is there, but in a different form. Pipe-warping is present (though they slide down the pipes on a mattress), as is Yoshi (albeit as a velociraptor), Toad is a minor character (though he gets turned into a Goomba), a bom-bomb shows up (and is actually remarkably accurate), we get to see the King of the Mushroom Kingdom for once (and you’ll never guess who plays him), the Mario Bros use the Kuribo’s boots to perform their trademark platform-jumps (and Kuribo’s boots are actually pretty cool), and the whole Mushroom Kingdom is dense and flat, giving the allusion of a side-scrolling video game! And that’s just for starters. You have to watch the movie multiple times to catch all the numerous references and in-jokes (like bars named “Bullet Bill’s” and “Thwomp’s”).

Bob Hoskins plays an excellent Mario. Keep in mind, this movie was made before Super Mario 64 and Charles Martinet’s rendition of the character as a high-pitched “Mickey Mouse with a Moustache”. Bob Hoskins plays Mario more in-tune to the Super Mario Bros Super Show version; a deep-voiced, sarcastic yet good-hearted plumber. John Leguizamo, despite being noticeably Latino, manages a decent Luigi. He’s missing the moustache, yes, but since when has Luigi EVER been interesting? The real star of the show has to be Dennis Hopper as the hilariously evil King Koopa. Sure, he’s not the turtle-dragon we recognize from the games and cartoons, but Dennis Hopper and his bizarre method of character-acting makes him enjoyable never-the-less. And don’t worry, you get your monster Koopa at the end.

Probably the strangest “error” is that Daisy is shown to be the Princess of the Mushroom Kingdom instead of Peach (in the games, Daisy was the Princess of Sarassaland). The reasoning behind the change was that they wanted the Princess to end up with Luigi, and since Peach is locked-in as Mario’s girl in the games, they switched her to Daisy. Current players of the games might notice, though, that ever since Super Mario Bros the Movie was released, Daisy has been hooked up with Luigi. So yeah, it did have some effects on the games.

As a fan of the games I thoroughly enjoy the movie so long as I watch it with the right perspective. But if you insist on watching this movie as an adaptation of the games, then yes, it is terrible. Super Mario Bros the Movie gets just about everything wrong aside from the basic premise and will serve as a consistent frustration to certain fans of the games. There’s a reason this movie shows up in DVD bargain-bins around the country.

Still, if you can look at it under the proper light, it’s a fun movie packed with video game references and cameos. I give it a C+. An entertaining effort, but destined to fail no matter what.