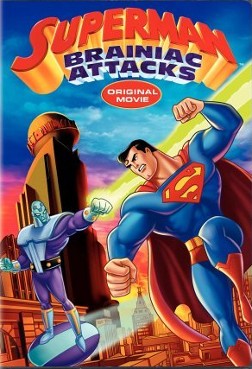 Only a week before the release of Superman Returns comes this ill-conceived train wreck of a straight to video movie. Most obviously cobbled-together at the very last minute as a side promotion for the live action feature, this film imitates the art style of the Bruce Timm/Paul Dini Superman animated series but includes little of the heart, depth or even voice actors.

Basically, the title explains the entire plot to you. Brainiac, Superman’s old nemesis comes to Earth and, er, attacks it. After a swift defeat by the Man of Steel, Brainiac joins forces with the villainous corporate fat-cat, Lex Luthor. Together, they scheme a plot to destroy Superman and dominate the planet. While he has this on his plate, Clark Kent also has to figure out his feelings for Lois Lane, which becomes even more difficult after she’s severely wounded during one of Brainiac’s attacks.

The script for this movie is so cut and dry it feels like nothing more than a Superman sampler platter, containing all the clichés of the franchise with little attempt to work them in creatively. To make matters worse, I honestly don’t think this thing was written with the Bruce Timm/Paul Dini universe in mind. The artwork is the same (for most of the characters), but the characterization is way off, especially on Lex Luthor. Lex acts more like his goofy, Pre-Crisis/Gene Hackman version, as opposed to his well-mannered, devilishly diabolical Timm/Dini version. This was most likely done to get the kiddies ready for Kevin Spacy’s take on the character in Superman Returns, which will be much closer to the Gene Hackman approach.

To make the movie more difficult to watch, a number of the original voice actors were not invited back. Most namely, Clancy Brown did not reprise the role of Lex Luthor, making this wacky version even more awkward to look at. While Powers Booth does play the “Classic Luthor” quite well, it just does NOT fit with the animation style. Lance Henrikson takes over as Brainiac, and you’d think that would be awesome, but unfortunately, he plays the character a very different way than the actor in the TV series. Brainiac laughs, makes puns and shows other signs of emotion. While this would have been great for a different version of the character, it does not fit the established Timm/Dini rendition. Mercy, Luthor’s Amazonian bodyguard, also has a new voice which makes her sound like a bubbly dither-brain. The voice direction was done by Susan Blu, quite possibly the BEST voice director in the business. So the voice-acting isn’t really “bad”, it just should never have been applied to this style.

However, the star attraction to this thing seemed to be the much anticipated return of Tim Daly as Superman. His departure from the role after the Superman TV series was much lamented by fans, even though his replacement on Justice League was superb. Well, I’m afraid I have to deliver some bad news to Tim Daly-fans; he’s lost touch with the character, considerably. He just doesn’t sound “right” as either Clark Kent or Big Blue. I guess that’ll happen when you quit a role for 5 years and then come back at the spur of the moment for a quick buck.

The Superman Animated Series theme has been tossed-out, regrettably. In its absence, we are “treated” to a Kasio Keyboard-rendition of the John Williams’ Superman theme. The music is the cheapest thing about this movie; the whole score feels like it belongs in a Super Nintendo game. While the Movie Theme has always been more iconic than the TV Theme, I always enjoyed that version and it fit the characters a great deal better than a cheap imitation of the John Williams melody. But, again, this movie was made as a tie-in to Superman Returns, which no doubt lead to the inclusion of the Movie Theme.

The animation is actually rather impressive. Lotto Animation, based in Korea, does a fine job with the fight scenes and choreography. While they aren’t up to the standard of TMS (Tokyo Movie Shinsha), the Emmy-winning animators of the Superman TV series, their animation is fluid and fast paced. Still, there are some minor character design differences from the TMS-animated episodes which long-time fans will notice, while more casual fans won’t give a crap about (Mercy being blonde, Jimmy without his mullet, the Phantom Zone monster being black instead of red, etc).

Overall, this piece of tie-in merchandise might not have been so awful had they given it a new set of character designs and not have tried to cram it into an already established (and extensive) animated universe. As it stands, Superman: Brainiac Attacks is just a bad movie.