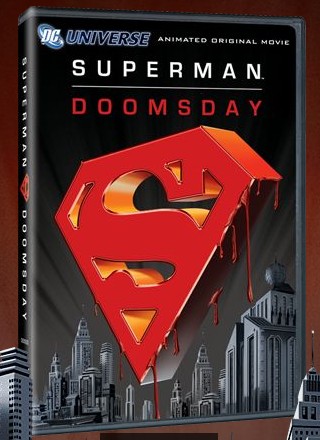 For those of you still bitter after the disappointed that was Superman’s last animated movie, “Brainiac Attacks”, you should be pleased to know that his latest offering, “Superman: Doomsday”, is actually a monumental improvement. While I wouldn’t rank it as one of the greatest animated films of all time, or even one of the greatest animated superhero films of all time, I’d certainly say it’s mandatory viewing for any Superman fan and definitely worth the seventy-five minute investment of your time.

An alien creature called Doomsday has awakened from his subterranean prison and begun a murderous rampage leading right into the streets of Metropolis. Superman (Adam Baldwin) challenges the beast to a knockdown drag-out brawl that ends in the deaths of them both. Metropolis mourns the passing of the Man of Steel, but not for long, as Superman apparently returns from the grave shortly afterward. Is this darker, more violent Superman the genuine article? Lois Lane (Anne Heche) doesn’t think so.

The title villain, Doomsday, actually only features in the film for the first twenty-five minutes before dropping out completely due to his, you know, death. The actual plot of the film revolves around Superman’s extended cast dealing with his death and the emergence of the “evil” Superman who goes around killing supervillains. While some may be irked that Doomsday is only in the movie for a brief period of time, it’s actually a rather accurate take on the source material, as Doomsday’s presence in the comics was primarily for a single big fight scene, with the aftermath of Superman’s demise being the true meat of the story. The evil Superman we get is a bit of an amalgamation of a few of the “Reign of the Supermen” characters from the Return of Superman arc, but he’s primarily an original character. I think I would have been a little happier had this evil Superman been a truer version of one of Superman’s post-death doppelgangers, as they could have made him Cyborg Superman pretty easily. Still, he advances the story quite well and is an interesting take on the “Reign of the Supermen” era.

A few other faces from the Man of Steel’s rogues gallery pop up. Lex Luthor is ever present and contributes significantly to the story. James Marster’s portrayal is alright but I felt the over-the-top “spurned lover” grieving angle was a bit much. The Toyman also appears in the middle, which was a real shock, as he was the last Superman villain I was expecting to see in this flick. Visually, he’s a bit more close to his comic book counterpart in this film then, say, the doll-headed version from the Superman animated series. Still, no matter how you dress him up…he’s still the freakin’ Toyman. They actually did a pretty cool job with him, at least as cool as Toyman’s ever gonna get, and I thought some of his weapons like the creepy killer baby doll were pretty sweet. John DiMaggio does a fairly good job of bringing Toyman’s voice to life, which I found interesting, as I never figured Bender from Futurama as a match for such a lame villain.

I think the major low point of the film is the voice acting, to be honest. Anne Heche and Adam Baldwin just don’t sound like they’re giving the roles their all, or at the very least they don’t sound like ideal choices for the characters. Actually, it sounded like voice director Andrea Romano was searching for actors who could emulate the voices from the Superman animated series, but they do it rather poorly. I also wasn’t big on some of the character redesigns, as once again they just come off as “trying to be like Superman the Animated Series…but not”. I know Bruce Timm produced and co-directed the film, but if he wanted to keep it separate from his previous Superman work he really should have gone with a totally different animation style. And Superman’s massive cheekbones make him look like an old man.

The action scenes for the movie are the real attraction. Superman’s fight with Doomsday completely blows away what we saw a couple years back in Justice League Unlimited and really brings the epic nature of the brawl to life. I was worried that the fights were going to be boring and lifeless like the ones in “Brainiac Attacks”, but as I already pointed out, this film is nothing like “Brainiac Attacks”. “Superman: Doomsday’s” PG-13 rating gives it permission to be remarkably more gory and daring than anything we’ve ever seen in a Superman cartoon before. The blood and the swearing can be a little jarring at first but you quickly acclimate to it.

As a Superman fan, I enjoyed the movie and didn’t mind the trimming of the story to fit the limited amount of time. Considering how short the flick was, they did a pretty good job. All you Superman nerds should also keep your eyes out for various Easter Eggs, such as Kevin Smith making a gag about giant spiders (check out “An Evening with Kevin Smith” if you don’t get the reference) and various memorabilia from the old Paramount-Fleischer Superman animated shorts scattered about the Fortress of Solitude.