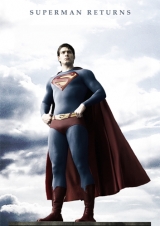 So the long-awaited Superman Returns has finally hit theaters. While the movie-itself managed to hit theaters, the outcome was both hit and miss. The story held up relatively nicely, save for some weak elements that felt too convenient or tacked-on. Most of the actors played their roles perfectly, save for the most important one. Overall, Superman Returns wasn’t as “super” as it was “somewhat above average”.

So Superman has been out in space for 5 years, looking for remains of his home-planet, Krypton. Finding nothing, he returns home to find the world has moved on without him. Lois has hooked-up with Perry White’s kid, Richard, and now has a 5 year old son (didn’t take her very long to get over Superman, did it?). Meanwhile, Lex Luthor has wormed his way out of prison and, after stealing some Kryptonian crystals from the Fortress of Solitude, now has the means to dominate the world. All because Superman was nowhere to be found. So Superman has to learn to adapt to the way things have become while reminding the world who he is and keeping humanity from destroying itself.

The story is well-conceived on most ends, though introducing Lois’ son really throws a kink into the works. It also makes the moments of romance between Superman and Lois feel very unwholesome, as she’s pretty much cheating on Richard (James Marsden), a nice guy who took care of her and there kid while Superman was out partying in space. It adds an element of drama, yes, but it also keeps the audience from totally liking Lois and Superman, as she comes off as a hussy and he comes off as a home-wrecker.

Brandon Routh, when all is said and done, just isn’t a very good Superman. An adequate Superman, yes, but a good Superman? No. What REALLY makes Superman in this movie is the use of nostalgia. John Williams’ larger-than-life Superman theme does a remarkable job of hiding Brandon Routh’s inadequacies in the role and brings Superman to life much better than the actual actor. Routh does a magnificent job channeling Christopher Reeves’ Clark Kent, on the other hand. It becomes almost creepy to a degree. A shame he couldn’t do the same with the alter ego.

Kevin Spacey steals the show as Lex Luthor and may very well be the best part of this movie. His take on the character is amazingly accurate to Gene Hackman’s rendition; it just feels so right. But unlike Hackman, Spacey brings an element of darkness to the character during key scenes. Sure, nothing close to the brooding, corporate executive Post-Crisis version most people are acquainted with today, but dark-enough to make Luthor more intimidating than campy.

Unfortunately, they chose to give Luthor a posse of incompetent side-kicks which will eventually eat-away at your nerves. While there’s nothing as annoying as Otis from the first two movies, Parker Posey plays a character absolutely identical to Ms. Tessmocker from the original films. I’ve never been a fan of Parker Posey, and this movie didn’t sway me in her direction. Luthor’s other minions aren’t so bad; some of them are even rather scary. But they aren’t given much screen-time compared to Posey (not even Kumar!) when they deserved so much more than her.

The rest of the cast fills out the roles nicely, even Kate Bosworth as Lois, though I still think she looks like a 17 year old girl. The direction is very intense, however, it can suffer from irritating “shaky cam” effects that annoy you more than mystify you. The effects scenes are a thing to behold, and when coupled with Williams’ theme, bring the character to life like never before.

Really, this movie had so much in its favor but faltered on several levels due to a number of bad decisions both in story and casting. I suppose Brandon Routh will have to be an “acquired taste”, as he’s certain to return for all the inevitable sequels. But as it stands, I just didn’t buy him. Still, the movie maintains that sense of wonderment you can only get from looking at the Man of Steel, and the scene in the ballpark where everybody cheers for him brought a smile to my face I just couldn’t hold back. So the movie wasn’t all bad.