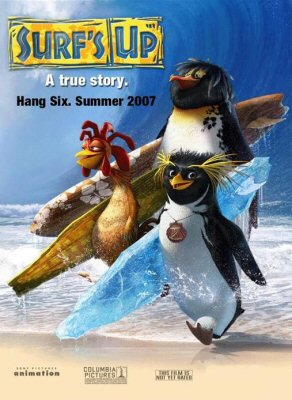 I really wasn’t expecting much from this flick. I mean, firstly, I’m sick to death of CGI-animated comedy movies. What I wouldn’t give for a good old fashioned cel-animated feature film. Secondly, I’m sick to death of penguin films. “March of the Penguins”, “Happy Feet”…just give it a rest already. So naturally, my expectations were geared toward a tropical blend of loathing and disgust. And yet “Surf’s Up” managed to defy my expectations by actually being pretty good. Go figure.

Cody Maverick (Shia LaBeouf) is an Arctic penguin who made it his life’s goal to surf after meeting the greatest surfing penguin of all time, Big Z (Jeff Bridges). His family thinks he’s an irresponsible loser who’ll never amount to anything, but Cody keeps his hopes afloat until the day Reggie Belafonte’s (James Woods) talent search discovers him and invites him to join the Big Z Memorial surf contest held at exotic Pen Gu Island. Cody’s hopes are quickly sunk, however, when he meets the competition: the tactless and ruthless bruiser known as Tank (Diedrich Bader). Cody’s on the verge of surrender until he receives a boost of confidence from his new pals: his lady friend, Lani (Zooey Deschanel), his best buddy, Chicken Joe (Jon Heder), and the enigmatic hermit known as Geek.

I think what accelerated “Surf’s Up” past other derivative dreck such as “Shark Tale” and “Antz” is that it decided to take a quirky and original approach to the plot. The entire film is from the point of view of a documentary film crew. The cameras and crew follow Cody and the cast around throughout the course of the movie, interspersing interviews, flashback footage, instant replays and various camera gags wherever necessary. This faux-documentary approach really kept the film fresh and provided a lot of clever jokes to break up the monotony of the predictable story and shallow characters.

Yes, take away the documentary angle and you aren’t left with much to chew on. While James Woods is always a joy to listen to, his character of Reggie is just your typical greedy scoundrel who really provides little to the conflict, while the main villain, Tank, is just a two-dimensional bully stereotype. I did like the choice of actor for him, however, as Diedrich Bader has proven to be a terrific voice over artist in shows like “Buzz Lightyear of Star Command” and “the Grim Adventures of Billy & Mandy”.

The good guys of the flick aren’t much more interesting than the villains. Chicken Joe’s stoner personality gets old rather fast, while Cody is your run-of-the-mill main character template (Wide-eyed and naïve – Loses self confidence – Realizes moral lesson of film – Saves the day at the end thanks to said moral lesson). While the characters aren’t much to write home about, their interactions with one another and character chemistry keep them from becoming boring. Watching Geek tutor Cody in the fine art of surfing and the misadventures there-in was a lot of fun.

Although the story is predictable and the lesson of “winning isn’t everything” is trite, this is a kid’s movie, after all, so you shouldn’t go in expecting an intellectually stimulating experience. Additionally, the writers seemed pretty self-aware that their ham-fisted lesson was a little gag-worthy and threw in a few jokes about it here and there.

As far as kid’s movies go, I found it much more clever and entertaining than the other CGI-animated flick in theaters as of right now, “Shrek the Third”. So if you’re down to a choice between the two, “Surf’s up” is your best bet. It’s a very fun kid’s flick with some nice animation, a decent cast of celebrities and a unique premise that keeps it from getting stale. Give it a chance, you might like it.