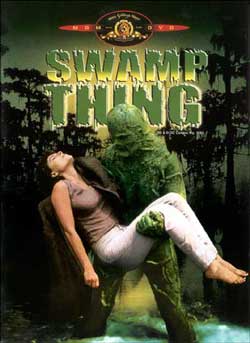 By all rights, Swamp Thing should have been a recipe for success. It was filmed in 1982 during the early era of Swamp Thing’s popularity (before Alan Moore signed on and made the comic sales sky-rocket), it was directed by the legendary Wes Craven and starred the likes of Louis Jourdan and Adrienne Barbeau. Unfortunately, although it had plenty going for it, Swamp Thing’s first foray into the world of live-action entertainment completely missed the mark.

Alec Holland and his sister, Linda, have been commissioned by the US government to create a formula to end world hunger by accelerating plant growth. The feds have stashed them away in a dark and eerie Louisiana swamp, and agent Alice Cable (Barbeau) has been hired-on as extra protection. What they aren’t aware of is that the evil criminal mastermind, Arcane (Louis Jourdan), wants to get his hands on the formula at any cost. During a raid on the government lab, Linda Holland is killed by Arcane’s men and Alec is doused with the secret formula, set on fire, and sent screaming to a watery grave in the surrounding swamp. Arcane’s men then try to finish off Alice Cable but she finds herself under the protection of a mysterious, grotesque behemoth covered in plant-matter.

There are a number of problems with this movie, so I’ll start with the worst. This was one of Wes Craven’s earliest attempts at film-making, even predating his career-making work on a Nightmare on Elm Street. So, to be honest, the directing is really pretty poor, as Craven isn’t sure if he wants to make a horror movie or a slapstick comedy (there’s a midget at the end of the movie making puns every couple seconds, for example). Making things worse is the music by Harry Manfredini; it sounds identical to his work on Friday the 13th. The lack of creativity in the score is very irritating, as you almost expect Jason to pop out of the woods at any moment. It’s like if they played the theme to Star Wars throughout the entirety of Indiana Jones. Arcane is a very poor villain; 2-dimensional in every sense of the term and only evil because the script says he is.

However, the biggest killer of the movie is Swamp Thing-himself. The costume they used for him is absolutely ridiculous. It’s a mass of bright green latex with some moss super-glued here and there. The outfit is preposterously unconvincing and drags the film into B-movie territory the moment it comes on screen. And Wes Craven seemed proud of the thing, showing it off in broad daylight for the bulk of the film rather than shrouding it in darkness like he should have. On the bright side, Dick Durock portrays Swamp Thing for the first time and would go on to play the character in both the sequel and the popular live-action TV series which aired on the USA network. Dick Durock plays a very good Swamp Thing, but unfortunately, for his first outing, he has a horrible costume to try and work with.

Then there are the fans of the comic book, like myself (Swamp Thing is my personal favorite comic book of all time). This movie is going to frustrate readers of the comic from the moment it starts. There are numerous changes to the story, for example, the character of Alice Cable was actually a man in the comic; a very important character named Matt Cable. They changed his gender so that Swamp Thing might have a love-interest. Even more perplexing, is that they went out of their way to *remove* Swamp Thing’s original love-interest, Linda Holland, who was his wife in the comic and not his sister. Arcane is also presented as a suave young man rather then a freakish old coot. The movie was considered so bad at the time that the Swamp Thing comics actually ripped into it on multiple occasions. Even Constantine (a regular in the comics) got a few nasty remarks in about the movie.

Swamp Thing is just an all-around poorly produced B-movie that won’t even appeal to the comic book’s fanbase. You might as well avoid it and pray for a remake.